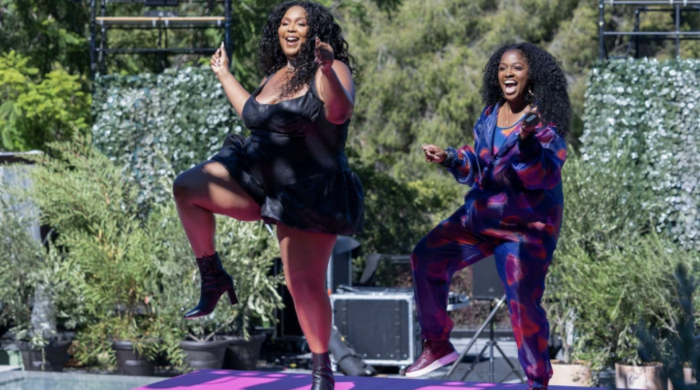 I was first introduced to Lizzo on Election Night 2016. Samantha Bee had booked her for what we all thought was going to be a Hillary Clinton victory celebration on Full Frontal. It was not. But, Lizzo was amazing and I fell in love with her right then and there.

Since that appearance, Lizzo has taken over a substantial corner of the world with hit records and collabs with other hot women of hip hop. I think two out of three commercials I see on TV these days use her music (get paid, girl!), all the while being unapologetically her big-girl self. Sexual and sexy, profane, fashionable, and full of energy in everything she does. It will come as no surprise to fans of the singer that her Amazon Prime show, Watch Out For The Big Grrrls, is all of that while also being overwhelmingly positive, joyful, and inclusive. The eight-episode series walks us through the process from audition to showtime for ten women vying for spots as part of Lizzo’s stage show at last year’s Bonnaroo and on her upcoming tour.

Each episode combats fatphobia and racism with a lot of glam, dancing, and without any subtlety. Lizzo also unflinchingly throws her support behind trans and queer representation from the first episode. The big message, across the arc of the show, is how important it is for these Big Grrrls to love and be comfortable with themselves. In one of the early episodes, echoing a sentiment that she often broadcasts across her social media channels, Lizzo tells the dancers, “It’s hard to love yourself in a world that doesn’t love you back.” Her aim with this show is to make that easier for this group of women, and for all of us watching. 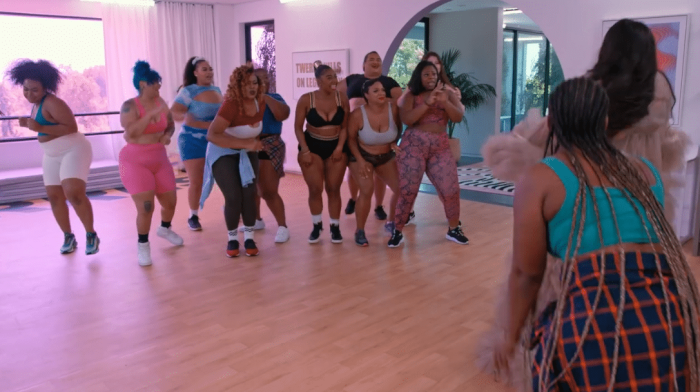 The women who audition for Lizzo in the first episode come from all over the country, ranging from classically trained to self-taught dancers. They are predominately Black and brown women but one of the more compelling storylines follows a woman of Korean descent. One of the most impressive auditions is from a trans woman who brought an amazing level of fire — with her background in gymnastics — to her routine. But all of the women are athletic and powerful. They can do flips and splits, jetés and pirouettes while wearing costumes, heels, and elaborate hairpieces. As viewers, we’re used to this meaning that there will be tough competition and cattiness in the shared “Big Grrrl Mansion,” but this is not a competition show that follows the rules of all the others. Lizzo is clear from the beginning of the process that she chose ten women and there are ten available spots on her stage. The conflict here is not woman against woman, it is woman against herself. Lizzo wants to lift these women up while they break down the barriers in their own minds about what they’re capable of and how their bodies look. It’s an incredibly powerful message that is backed up by all of the choreographers, designers, directors, trainers, makeup artists, and dancers who join her on the show.

Lizzo promotes the idea of her Big Grrrls being a sisterhood and a family. She emphasizes that she wants to create an environment where these powerful women can thrive and feel safe as they compete. The show seems to succeed in that. There’s no real interpersonal drama to keep up with. The women all support and cheer each other on in each episode. Even when members of Lizzo’s team come into the house to get a sense of group dynamics, they have to work hard to get anyone to spill anything close to tea. These women don’t want to tear each other down; they all seem very aware of how their different backgrounds affect how they relate to each other. As much as there’s a loving vibe being cultivated here, it is still an audition process and no one is safe from elimination if Lizzo and her team think they won’t be able to cut it on stage for 90 minutes. Not everyone we meet in the first episode makes it all the way through. But Lizzo is transparent about the reasons she’s sending girls home, and they’re handled with delicacy and grace. There’s nothing mean-spirited about this show. I know that probably sounds boring compared to all of the adrenaline-fueled competition shows out there, but watching what amounts to a dancer boot camp makes for compelling television. The closer they get to the Bonnaroo show, the more intense the rehearsals and emotions get.

Of course, last year’s Bonnaroo was canceled because of a hurricane. So, just like in real life, plans changed at the last minute. The culmination of the show and this audition process we’ve been watching is a show in Minneapolis, Minnesota, where The Big Grrrls perform in front of 16,000 people. In the end, we’re left feeling good as hell, reveling in their success alongside the dancers themselves. Lizzo’s message for her Big Grrrls, and for all of us, is to love ourselves, feel good about our bodies, and be proud of what our bodies can do. This is not something we hear from the media often. Body positivity is too often criticized as rewarding an unhealthy lifestyle. But Watch Out For The Big Grrrls goes a long way toward dispelling any notion that big girls can’t be strong and healthy. The way Lizzo and her team lift them up and support their dreams with sensitivity and honesty is refreshing to see. Women need to hear more messages like the ones Lizzo has for us. Disregard all of the noise, forget all of the things people have always told you you’re unable to do. Believe in yourself, get out of your head. And if you really want something, go out there and do the work to get it.

All eight episodes of Watch Out For The Big Grrrls are available to stream on Prime Video.