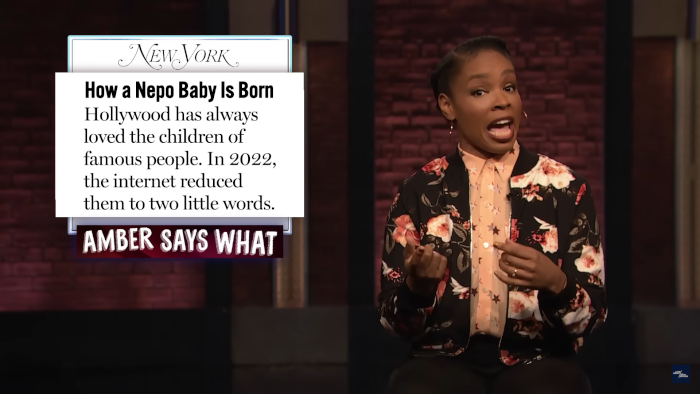 Amber Ruffin Just Found Out What A Nepo Baby Is

Yesterday I asked if anyone was as charming as Michelle Obama. You all said no, and I agree with you. That said, Amber Ruffin may come close. The late-night host has charm to spare, is hilarious, and is relatable (more on that in a moment). Who better to get your weekly news from?

Ruffin recently appeared on Late Night with Seth Meyers (where she is a writer) for another edition of Amber Says What. She discussed Andrew Tate, Bill Cosby, people who don’t hate women, AI art, and nepo babies! Nepo babies have been a big topic of conversation lately, with people like Jamie Lee Curtis coming out to defend them, and Allison Williams avoiding that pitfall. Amber’s response to the discourse is as funny as you would expect.

My favorite moment of this bit was a moment that seemed unscripted. I say “seemed,” because Amber is so damn talented I would believe that the whole thing was planned. At one point, while running down a list of the lies of George Santos, Amber is handed a cigarette to smoke. I kept trying to figure out if the cigarette was real and according to Amber, it was! She then goes on to say she wants a hundred more! As a fellow former smoker, I lost it at this bit. I would never want to smoke again, but I always want to smoke again. It’s a wild feeling.

We are so lucky that Amber Ruffin is here to break down the news for us. Even if I thought the AI art joke was a little tone-deaf. AI art is bad, y’all. However, Ruffin is so good that she gets a pass.


← Allison Williams Preemptively Delivers the Perfect Answer to the Nepo Baby Issue | Will Kevin McCarthy Be Elected Speaker on the 7th Ballot? →