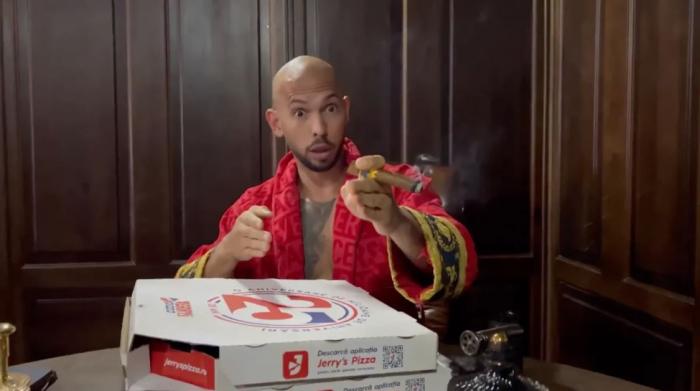 Andrew Tate has always sucked. Ever since he first appeared on Big Brother in 2015 he’s been a misogynistic toad forcing his way into the public consciousness. Like many of his dates, we didn’t get a say in the matter. He became Internet famous thanks to YouTube videos appealing to the incel crowd. His blatantly abusive language and dating tips are a big draw among young men who lack the wit and personality to function in normal society, and despite being banned by most major social media platforms — and reinstated by Elon Musk — his popularity has only grown. And it bothers me that he looks like a soulless Paul Scheer.

Things recently took a darker turn for the kickboxer turned sapient Maxim magazine when Romanian police arrested Tate and his brother on suspicion of kidnapping and human trafficking. Along with a former police officer and another unknown suspect, the Tates have been suspects since an April 2022 raid where police found an American woman who stated she was being held against her will. The Tates were released after questioning but remained suspects in the investigation, and were arrested on December 29. A subsequent court order has them detained for 30 days, though it’s under appeal. Authorities also seized his fleet of vehicles, valued at well over $5 million. They further deny Twitter rumors that the pizza boxes in Tate’s weak-sauce response to Greta Thunberg’s “small dick energy” burn led to Tate’s capture, but I believe it because we deserve nice things.

Yesterday, Vice released a report that 2 women alleged rape and physical assault at Andrew Tate’s hands in 2015. One woman, “Sally,” told officers that Tate repeatedly hit and choked her and other women to coerce them into continuing to perform for his webcam business. She also backed up a coworker, “Helen,” who reported her sexual assault by Tate to the authorities. The report was given to the Hertfordshire Police, who took four years to pass it up to the Crown Prosecution Service. CPS declined to prosecute. The reports filed in 2015 are nearly identical to the allegations by Romanian authorities, and directly in line with everything Andrew Tate’s ever alleged about himself. He fakes a romantic interest in women until they form an emotional attachment that he exploits to get them working for his webcam model business, for which they’re paid a pittance. He forces them to continue working by plying them with drugs and alcohol, emotional manipulation, and physical violence. After Sally and Helen reported Tate, police informed Big Brother producers of the allegations. Tate remained on the show for 5 days while the production company and Channel 5 consulted with authorities and Tate’s lawyers before he was eventually removed.

The story is worth reading in its entirety. It describes the UK’s police and prosecution policies to undermine sexual assault accusations and take as few of them to trial as possible to improve conviction rates. It’s grim stuff. Nonconsensual strangulations and beatings appear to be Tate’s preferred method of gaining compliance, and Romanian authorities claim to have found at least 6 potential victims of the Tates’ manipulation. Tate denies all the allegations, despite having bragged numerous times online about his own abusive behavior.