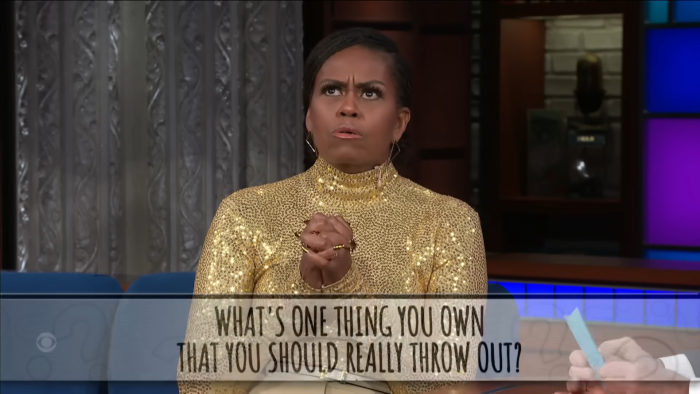 Is Anyone More Charming Than Michelle Obama?

Politics make people weird. I’m not just talking about that uncle you avoided on New Year’s Eve. People who get into politics can go from normal(ish) people to robots who can’t answer questions without going off on eight tangents. Politics also breeds a lot of losers and liars. That’s not always the case. Now and then, someone emerges from the political landscape with the same charm, wit, and humility they came in with. I’m talking about Michelle Obama.

The Former First Lady recently sat down with Stephen Colbert to take the Colbert Questionnaire. The questions she was asked are almost irrelevant. What’s relevant is that Michelle Obama has more charm in one eyeball than most people in politics have in their whole bodies. It may help that she didn’t hold an office, but she worked her butt off as First Lady and dealt with heinous personal attacks. To come out of the White House with the amount of character and humility that she has is an incredible feat.

If the Questionnaire isn’t enough for you, Michelle recently appeared on Conan O’Brien Needs A Friend. Spoiler alert, she comes across just as well on that show. You can tell that talk show hosts love her. She makes their jobs easy because she’s so freaking cool. It’s that easy. Politicians should take note, but you know they won’t.