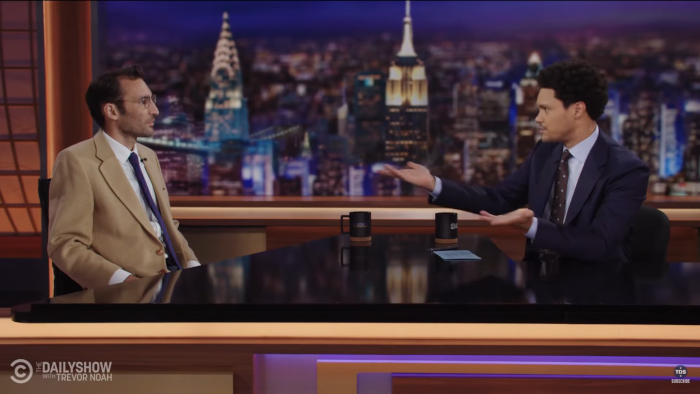 Alec Karakatsanis Breaks Down Copaganda On 'The Daily Show'

I live in New York City, where a former cop (who still acts like a cop), Eric Adams, is Mayor. So far, he’s pushed this idea that NYC is a crime-ridden cesspool that can only be fixed by adding more cops and cutting funds from public schools. He talked all about it when he appeared on The Daily Show. This time around, Founder of The Civil Rights Corps Alec Karakatsanis appeared on the show, and, without naming him, basically explained why Adams and people like him are full of shit.

As Karakatsanis explains, the solution to this country’s woes is not to throw more cops at them. However, that’s what keeps being pushed. A narrative is shoved down our throats, that more cops mean more peace, even though we regularly see the opposite being true. Cops harass, attack, and murder more than they prevent. They run away and hide when they swore to protect and serve. Yet we are bombarded by this idea that cops are the only things standing between us and complete societal breakdown.

It’s hard not to get amped when Alec Karakatsanis speaks. He makes clear, perfectly logical arguments, and The Daily Show crowd was eating it up. What was hard was seeing Noah’s reaction to it. When Adams appeared on The Daily Show, it was pretty clear that he was going easy on the boneheaded Mayor. Here the opposite is true. There’s more pushback, and Noah doesn’t even let Alec have the final word. I’m in no position to question Noah’s intentions, but looking at both interviews side by side paints a troubling picture.

Our country is firing teachers and hiring cops. We’re cutting after-school programs and investing in-school police officers. Our priorities are all out of whack, and that’s just the way cops like it.

← One 'First' Cancelled by Showtime, and Another 'First' Killed by Netflix | Book Bans Are Bad →