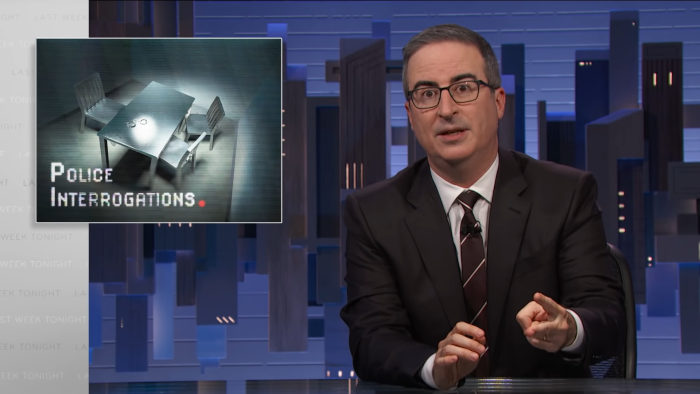 “If you f***ing beat this prick long enough, he’ll tell you he started the goddamn Chicago fire, now that don’t necessarily make it f***ing so!” That is a line said by Chris Penn in the 1992 Quentin Tarantino film Reservoir Dogs. I remember hearing that line at the tender age of 14 and having a mini-revelation. Call it naivete, but up until then, it never occurred to me that coerced confessions weren’t still viable. They admitted it! Case closed. However, there was a criminal in this movie made for adults saying that coerced confessions were bad.

At the time, I assumed that if bad guys knew the danger of false confessions, surely the police did too. Spoiler alert: that isn’t f***ing so. This week on Last Week Tonight with John Oliver, everybody’s favorite downer dove deep into the reckless pseudoscience behind police interrogations and how it helps officers obtain confessions from innocent people. Like most problems with the police, this one is systemic. They are trained to interrogate with outdated and sometimes flat-out wrong methods. Innocent people have served decades in jail, and some are even executed, despite never committing a crime.

While Reservoir Dogs may have contained my first exposure to possible police corruption, a docu-series drove that home. The series in question is Making A Murderer. In the docuseries, Brendan Dassey, a young man and special education student, was shown to have been arrested as an accomplice to murder after being intensely interrogated, alone, by police using the Reid technique: An outdated method of interrogation that Oliver cites in this episode. Again, putting my naivete on full display, I did not think or know that police did things like this. Unfortunately, it happens all the time.

Police can lie to suspects, threaten them, and decide they are guilty based on what amounts to little more than a hunch. Even if they are wrong, they can and will be celebrated as heroes to their communities. All the while, innocent people end up locked away for life or worse. It’s not right. Even “Nice Guy” Eddie knows that.