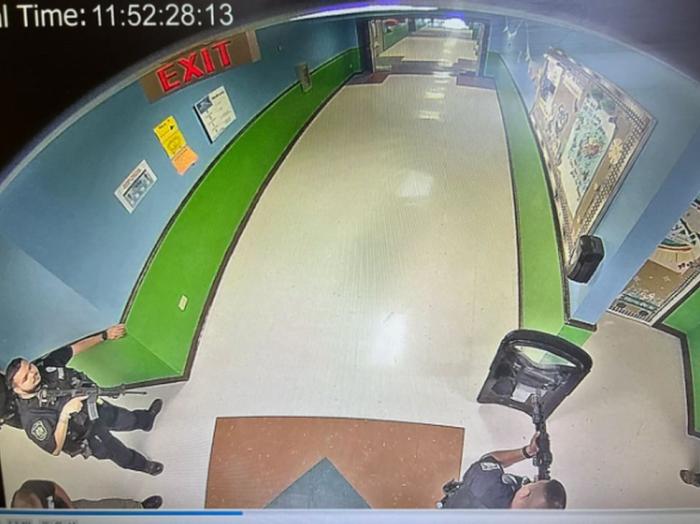 After 19 children and several adults were killed by a young adult who shouldn’t have access to a cap gun let alone an AR-15, the Uvalde Consolidated Independent School District Police Department closed ranks. Conflicting and misleading statements were given to the public including claims of school officers confronting the shooter — they didn’t — and accusations that a teacher propped open an outside door — she didn’t — Uvalde city officials swiftly moved to block the release of webcam footage and police reports using what’s known as the “dead suspect loophole.” It bars the public release of information when a suspect is killed and is often used by police to hold back footage of shooting unarmed suspects and civilians. In this case, the city claimed releasing the footage would put the investigation and their officers at risk, claiming it would be “highly embarrassing information” and subject local officers to “a substantial threat of physical harm” — and we all know how the Uvalde School District Police respond to substantial threats.

First among individuals working to keep tragic details from the public is Uvalde ISD police chief Pete Arredondo, who was the first ranking officer on the scene, which by SOP and tradition put him in charge during the massacre. Details released by TX Department of Public Safety Director Steve McCraw paint an unflattering opinion of Arredondo that gets worse by the day. Since May 24 we’ve learned every action by Chief Arredondo prolonged the tragedy and, in some ways worse, all his statements since are deeply suspect if not blatant lies. The Texas Tribune has released an avalanche of damning facts over the last several days. Arredondo left his radios in his car when he reached the scene. He told dispatch over the phone that officers were unable to breach the classroom because they were only armed with pistols, lacked body armor, and that they lacked the tools necessary to break into the locked classrooms. He claims he didn’t think he was in charge despite established precedent and has done his best to shift blame.

None of this was true. Officers armed with rifles were on-scene within minutes and, according to McCraw, could have breached the room within 3 minutes. Video surveillance proves Arredondo never checked the classroom door locks, despite testimony he did so. It appears instead that he assumed they were locked and never tried them. Teachers had reported to the school administration prior to the shooting that the door locks were malfunctioning. In addition, they had a Halligan — an efficient breaching and firefighting tool invented in the 1940s — on site within minutes. They had ballistic shields in less than 20 minutes but waited another hour to breach. When the master keys Arredondo was waiting on finally arrived, he wasted time trying them on other doors. One DPS special agent, frustrated with local police dallying outside the door, broke ranks to evacuate what children he could from the building. The most damning detail may be that Uvalde CISD officer Ruben Ruiz received a call from his wife, Eva Mireles, from inside the school. She had been shot and was bleeding out. When officer Ruiz failed to get help from his department, he attempted to enter the hallway outside the classroom only to be disarmed, detained, and escorted from the premises. Eva Mireles died in her classroom of the wounds she sustained protecting her students while she waited for help that never came.

The husband of late Uvalde school teacher Eva Mireles is an officer who responded to the scene. He knew his wife had been shot. When he tried to help, he was detained. https://t.co/0yIE9nIkgt

Uvalde Mayor Don McLaughlin, a Texas good ol’ boy last seen calling Beto O’Rouke a “sick sonofabitch” for confronting Governor Abbott on his dismal firearm safety record, accused the DPS on Tuesday of selectively releasing information to make local officials look bad, an unnecessary effort given how video and audio surveillance of the day does that all on its own. “McCraw has continued to, whether you want to call it, lie, leak … mislead or misstate information in order to distance his own troopers and rangers from the response,” McLaughlin said despite Uvalde CISD’s chief being the on-site commander. “The gloves are off. If we know it, we will share it,” he continued, despite the town hiring a private law firm with taxpayer money to block the release of police records.

Chief Arredondo was recently sworn into the Uvalde City Council thanks to an election taking place prior to the massacre. He has not attended a meeting since and was unanimously denied a leave of absence by the rest of the council. He has refused to comment or answer questions publicly about his role in this tragic debacle. His lack of courage, already responsible for 22 deaths, now works to hide the depth of his failure from Uvalde community members and the public at large.