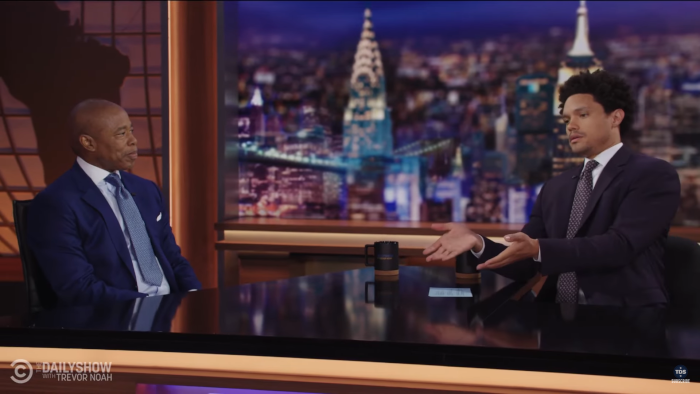 New York City has had its fair share of bad mayors. Bill de Blasio quickly made it clear that he was more interested in New York’s wealthy elite. Michael Bloomberg pushed stop and frisk like it was his only concern. Rudy Giuliani … existed. However, our current Mayor and Forever Cop Eric Adams has managed to possess all of their bad qualities combined. His recent interview on The Daily Show highlights a very basic fact about him. He is a Republican who hates poor people.

Let me start by saying I’m disappointed in Trevor Noah. Trevor lives and works in NYC. He gets to see firsthand just how bad Adams being Mayor has been for most people. Despite this, Noah goes easy on Adams. He asks a couple of tough questions but offers no follow-up when Adams gives a bullshit answer. That’s what Adams relies on. He always has answers; they just don’t make sense if you think about them for more than two seconds.

Noah asks Adams about rents skyrocketing in NYC. How can people return to work, which Adams pushes for, if they can’t afford to live here? What about people that are being forced from their homes when their rent is suddenly increased? Eric’s response is to look at the affordable housing units he wants to build. Then he immediately blames NYC residents for not being able to find places to build these magic homes. Not only is that a weak deflection, it still doesn’t answer the basic points of the question. Who gets these affordable homes? What if people don’t want to leave a home they’ve been in for decades? Adams doesn’t care.

When Noah brings up public schools and their lack of funding, Adams pivots to an old favorite. He is dyslexic and is pushing for all children to be tested for dyslexia. Great! But again, that doesn’t answer the question. Teachers are being laid off, programs are being cut, and Adams doesn’t care. He reasons that public schools haven’t done as much for Black and brown students as they should. While that is a fair criticism, taking money from the schools is not the answer. It’s the same language that is being used by people who want to defund public schools and give more money to private schools.

Finally, Trevor brings up the NYPD. To Adams’s sinister credit, he doesn’t shy away from how much he loves his cops. He loves them so much that their budget was increased to $11.2 billion. Let that sink in. People are drowning because he won’t pay lifeguards. Schools are failing because he won’t pay teachers. But he says we need cops to be prosperous. His defense is that people shouldn’t be able to treat NYC like it’s an anything-goes kind of town. He has said this before when an old woman was arrested for selling churros on the subway. He’ll likely say it again when he has to answer for this:

NYPD scumbags arrested one of the best subway musicians the other day….he goes by Jazzajillo and his motto is literally “Dancing is Happiness”

Eric Adams has said that we shouldn’t demonize the NYPD. Instead, he’d like to demonize poor, hard-working people who are just trying to get by. The people who are the heart of this city. They are here year-round, struggling to survive, doing jobs that transplants and tourists often take for granted. Eric Adams hates these people because he hates New York City, and it’s getting harder for him to hide that.