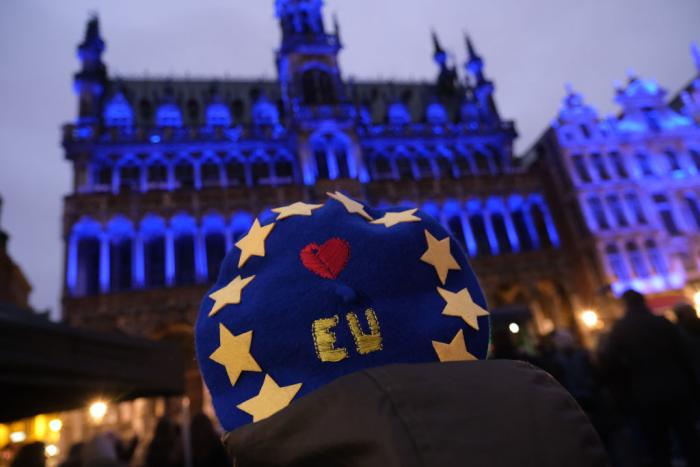 I’m sorry I don’t have any songs for you tonight. You may have noticed that the UK politics chat has been rather quiet of late, and that’s because we’re all still reeling from the events of December. Kayleigh’s been flying the flag with the Sussexit and Prince Andrew updates, but when it comes to covering Boris Johnson and Brexit, well, we’ve not quite had the stomach for it.

As of right now, the Brexit wheels are in motion. There’s no stopping it. In all likelihood, as you read this, I’ll be curled up in my EU flag, having a little cry. We knew the hope was gone, but as the minutes ticked away and the countdown reached its inevitable conclusion, I felt it. That last little ember flickering, dying in the January cold. It’s done. It’s over.

What does that mean? For now, everything and nothing. The Leavers didn’t get a special set of bongs from Big Ben, or a firework party over Westminster. They got some tea towels, mugs and a commemorative 50 pence piece instead. They are disappointed. Welcome to the party, pal.

On the continent, they will already have moved on. It will be February for them already. We’ll have another hour of January to think about what we have done before we follow them, an hour behind as usual, and a step behind forever.

The sun will come up tomorrow, but the land it illuminates will be smaller. It may be crueller. Flags will come down. Johnson will smugly proclaim that Brexit is done, and promptly ban the word from all future documents lest the mere mention of it shatter the jingoistic illusion of the new order. But he’s lying, as usual. Brexit is only just starting.

All that we have done so far is establish the terms of the transition period. All that talk of deal or no deal was about the year ahead, during which the UK and the EU need to hammer out all the terms and conditions of our future relationship. Just a few teeny, tiny details, then. For now, we are still in the single market and the customs union, but no longer sit at the table with a voice in the decision making process. For our neighbours, that will be a relief — they no longer have to tolerate the presence of Farage. Lucky them.

What are we left with? The future is in the hands of Johnson’s cabinet. The Opposition is trying to rebuild, but they are in the midst of an existential crisis. The divisions haven’t healed; we are tired, despondent, bitter. We look across the Atlantic and see what looks like a flashback to the Autumn playing out in front of us. We sigh. We try to keep our powder and our faces dry. There will be more battles ahead. We will need to be ready. Soon, we will crack our knuckles, summon our strength and rise to our feet. We will channel our inner Chumbawumba once more.

For now, raise a glass to what might have been. Raise a glass to putting it off for as long as we did. Raise a glass for the small battles, and the small victories. Raise your voice and sing the parody songs a few more times. Hug your pets. Scream into a pillow. And never forget: It’s pre-Brexit that is over. The real thing has only just begun.