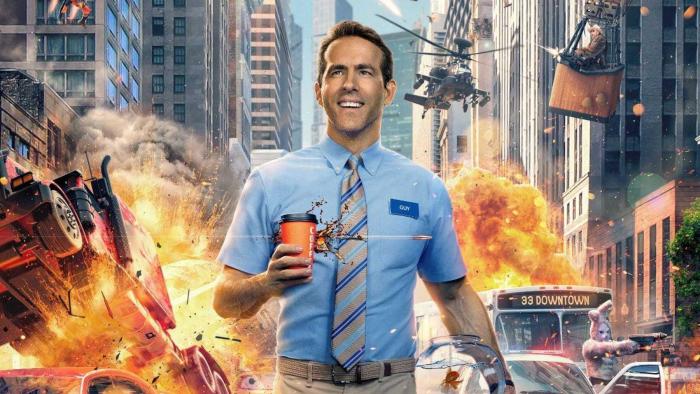 There’s been a lot going on over the past week. So here’s all the trailers you might have missed, including the just-dropped new look at Ryan Reynolds’ much-anticipated action-comedy Free Guy.

SAVE YOURSELVES! hits digital on October 6.

This sci-fi comedy stars Sunita Mani and John Reynolds as a Brooklyn couple who aims to reconnect with each other by disconnecting from the internet. Bad timing: they do it just before an alien invasion hits. Check out a clip:

Welcome To The Blumhouse arrives on Amazon Prime tomorrow.

Blumhouse is unveiling a collection of four new horror movies to Amazon Prime in October. The first of which, Black Box and The Lie, debut on the streaming service tomorrow. In anticipation, FJØRA has released a new music video for a haunting re-imagining of Linda Perry’s “What’s Up.” Perry not only provided inspiration for this cover but also produced it.

Adam Sandler stars as the local punchline of Salem, Massachusettes. But who will be laughing when Hubie sets out to solve a murder? Julie Bowen, Michael Chiklis, Kenan Thompson, Steve Buscemi, Maya Rudolph, Kevin James, and Rob Schneider co-star.

FRANK AND ZED World Premieres At Nightstream on October 10.

The virtual horror film festival hits this week, and among its premieres is this twisted tale of monsters and mayhem! The story follows two rotting monsters, Frank and Zed, who are forced to face off against a merciless mob. There will be blood. And puppets.

JINGLE JANGLE: A CHRISTMAS JOURNEY on Netflix on November 13.

KINDRED coming to theaters and VOD on November 6.

Directed and written by Zeina Durra, this romantic drama stars Andrea Riseborough as a British aid worker who reconnects with her former lover (Karim Saleh), a talented archaeologist. As they regard the historic place for which the film is named, the couple considers the past and their future.

Ryan Reynolds stars as Guy, a mild-mannered bank teller who realizes he lives in a video game. However, he is tired of his 8-bit role in it. Jodie Comer, Joe Keery, Lil Rel Howery, Utkarsh Ambudkar and Taika Waititi co-star.

← Don't Forget About the Disturbing Sexual Harassment Allegations Against Kimberly Guilfoyle | Reddit Asks the Question: 'What's the Dumbest Thing You've Seen a Man Do to 'Prove' Their Manhood?' →