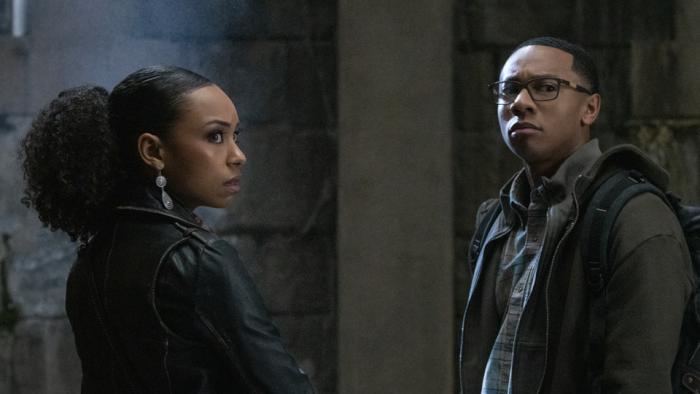 The third season of Netflix’s Dear White People completely abandons its formula from the first two seasons. Gone is the voiceover narration from Giancarlo Esposito, in part because Giancarlo Esposito becomes a character on the show (he’s a member of the secret society, The Order, introduced in last season’s cliffhanger). The series also bails on featuring a focus character each episode, opting instead to bounce from character to character and multiple storylines over the course of the season. Joelle has also taken over the “Dear White People” radio show from Sam, although the show itself — one of my favorite parts of the series — only makes a few brief appearances. The social commentary, too, is less pointed; it’s been woven more subtly and organically into the storylines. Some of the characters, too, have evolved, which is good, but in some ways, those evolutions are inconsistent with who they once were. Lionel, for instance, tosses aside his endearing nerdery and some of his writer-ly ambitions for a non-stop pursuit of sex, even if that takes the formerly reserved character to the occasional orgy.

The changes aren’t necessarily bad — it operates more like a traditional single-camera comedy now — but it takes some time to adjust. Over the course of the first several episodes, the storylines meander before they finally gel (the third season suffers somewhat from Netflix bloat). It also takes viewers some time to reorient themselves with the characters after what was essentially 15 months between seasons. Once those storylines come together about midway through the season, however, Dear White People successfully lifts off and delivers an excellent back half of the season.

Part of the early season meandering is by design: The characters themselves are trying to find themselves. Sam, for instance, is still dealing with the death of her father and searching aimlessly for a subject for her junior thesis, waiting for it to come to her. Hers is more of a background story this season, although it does, figuratively speaking, throw a few jabs at Spike Lee while ultimately celebrating Tyler Perry (it works better than you think it might). Meanwhile, Sam’s white boyfriend Gabe gets a hard lesson about privilege after his parents lose all their money, leaving him to scramble to earn money to pay his way through college. Expectedly, he does not receive a lot of sympathy from the women and people of color around him, although he eventually finds a way to gain respect. Sort of (there may or may not be a few pokes at Elizabeth Warren in Gabe’s storyline). JoJo spends most of her season preoccupied with studying while warding off the advances of Rashid and trying to find time to spend with her boyfriend, Reggie.

Troy, now close to his father, the Dean, tries to overthrow Kurt Fletcher, the frat-bro running the comedy magazine. When that fails, Troy launches his own publication, recruiting a black Republican to help fund him. That eventually steers him into a dangerous confrontation with The Order, which Sam and Lionel continue to look into, although that storyline is almost completely dropped for most of the season. It does, however, eventually dovetail into the season’s chief storyline involving Reggie and his mentor, Moses Brown (Blair Underwood).

Moses’ storyline is rife with complication, which also makes it the most interesting. He is an inspirational Black figure on campus — and every bit as charming as Blair Underwood is — but he also has some MeToo problems with a wealthy white student named Muffy. That storyline gets particularly sticky when it pits the kind of “lean-in” white feminists you might associate with someone named Muffy against Black women, as well as the reluctance of some in the Black Caucus to take on a revered Black mentor. There are shades of Bill Cosby here, but it’s designed to be more ambiguous in an effort to tease out all the intersectional race and gender issues, and it is thorny and fascinating, even as it dares to satirize and skewer The Handmaid’s Tale, which is an unusual flex in this era.

The season is ultimately successful — at least in the back half — even if it takes a few episodes for it all to come together and for audiences to adjust to the new iterations of the characters. In the Peak TV streaming era, however, audiences may be quicker to bail, even on previously beloved series, and given the three-season curse at Netflix — plus all the money they just spent on two white guys — I worry that we may never get a chance to see senior year for all these characters at Winchester.

← The Creepiest and Most Sexist Reviews Ever Written | 5 Shows After Dark: 'The Cure' Premiere TNT and TBS, 'Two Sentence Horror Stories' Premiere on The CW →