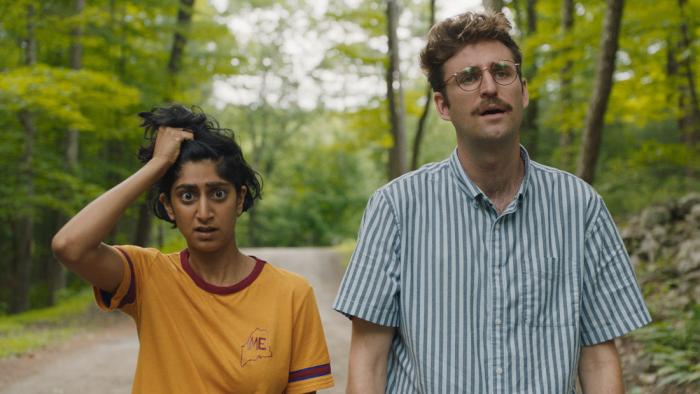 Review: 'Save Yourselves!' Makes The End Of The World Pretty D*mn Funny

We’ve become addicted to our phones. With their glittery apps of eternal scrolls through memes, news, and FOMO-inducing snapshots, we are their prisoners. Maybe this is hurting the intimacy IRL. Maybe you yearn to put down your phone and pick up with your partner. That was the goal of one Brooklyn couple, who took a week off for relaxation, reconnection, and absolutely NO PHONES. Then the apocalypse hit, and they were not informed. This is the delightfully deranged premise of Save Yourselves!, a creature-feature that blends horror and sci-fi with observational humor to hilarious effect.

Sunita Mani and John Reynolds star as Su and Jack, a personal assistant and website designer, whose closest bond is with their respective phones. So, when a buddy offers them a free week away in a remote cabin, it seems a perfect chance to rediscover each other. (And hey, maybe they could possibly sort of maybe talk about having kids perhaps.) The two try to go cold turkey, shutting off their phones and taking in the sights and sounds of nature. Behold the tree-stuffed valley that lies before them. Breathe in that fresh air. Listen to the birds, the breeze, and holy shit! Are those gunshots?!?

Co-writers/co-directors Alex H. Fischer and Eleanor Wilson drop clues for audiences that all is not well on this retreat. We’ll witness panicked locals racing through the woods from some unknown threat only to be mercilessly tackled by a blur of fur. Su and Jack are too distracted by their bickering to notice. They won’t realize something’s up until a strange “poof” appears in the living room.

The core of the comedy is essentially watching two navel-gazing hipsters, obsessed with sourdough starters and internet culture, trying to survive the apocalypse. For example, they know you need a “go bag” of provisions, but they only packed fresh vegetables and frozen seafood for this vacation. Though they have access to a gun, they ferociously debate whether they’re safer without it. As they argue, the world goes to hell around them.

Fischer and Wilson smartly push this solidly amusing fish-out-of-water premise beyond the walls of the cramped cabin. Once the couple flees, an exhilaration hits as anything could happen from here. Things just get wilder and weirder, spilling into fight scenes, trippy bits, and some genuine pathos about their uncertain future. However, it’s a rocky journey with little flow. The scenes feel like comedy sketches clumsily knitted together. Some beats are redundant, and a pair of heartfelt monologues feel earnest yet clunky in the midst of panicked planning. Such rough-and-tumble shifts in tone awkwardly roll into a finale that is totally unpredictable but may be nonsensical.

To their credit, Mani and Reynolds give their all to every moment. There’s an ease between them that makes them instantly believable as a long-term couple who’s gotten too comfortable. They spark with tension when a bickering brews. They share a sharp comedic timing that makes punchlines and barbs crackle and are cartoonishly terrified as they flee and fight killer poofs. Each also offers a chaotic vulnerability that draws us into their plight and panic.

All told, Save Yourselves! is a bit rough around the edges. Yet it delivers surprises and laughs, along with a couple of solid scares, making it a terrifically fun and quirky romp.

Save Yourselves! hits theaters nationwide on October 2, a digital release follows on October 6.