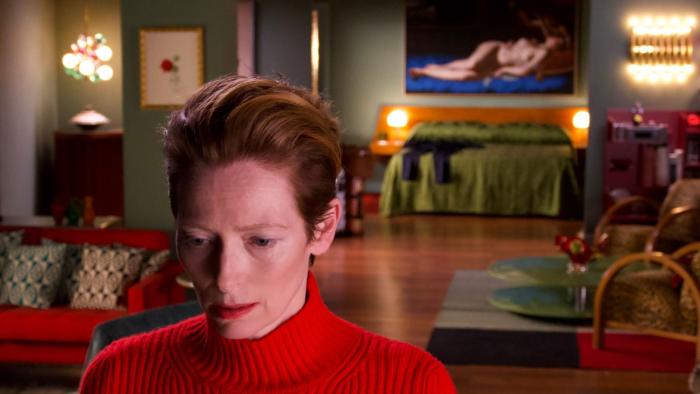 In the midst of this pandemic, productions around the world shuttered. Theaters closed. Film festivals canceled or frantically pivoted to virtual. Release dates promised a return to some sense of normalcy, then got pushed, again, and again, and again, crumbling our hopes with each move. In the midst of the pandemic, an unexpected announcement shined as a radiant and strange ray of hope.

World-renowned Spanish auteur Pedro Almodóvar revealed he’d teamed with Academy Award-winning chameleon Tilda Swinton for a short film, The Human Voice. We don’t often cover short films here at Pajiba. However, when two titans of cinema team up in such an extraordinary way, how could we not make an exception?

Making its U.S. debut at the New York Film Festival, The Human Voice stars Swinton as an unnamed woman, who is stricken with heartbreak. Adapting French poet Jean Cocteau’s play La Voix humaine into an English-language drama, Almodóvar spun its young heroine into one of his signature divas. The woman Swinton plays is not young, which makes her circumstances feel all the more dire. Her lover of the last several years has abruptly left her. She is alone in their apartment, save for his dog, who looks for him endlessly. We are the silent witnesses to her agony as she shuffles through DVDs, beholds his pressed suit lying limp on his side of the bed, and makes a trip to a tool store for a hefty ax. The bulk of this 30-minute short is the woman on the phone with her ex, who is unheard.

Swinton is entrusted with a one-sided conversation that is meant to unfurl the complexities of their relationship, the events of its end, and the mental state into which this emotional trauma has pitched this woman. She is dramatic, glamorous, and damaged, like many of the complicated women on the verge of a nervous breakdown that Almodóvar has presented to us. She is a vision and a terror. She is glorious in her flaws and ferocity.

Swinton begins the film by swanning about a soundstage in an opulent, violently red, velvet gown. This stage is where her apartment is built. Almodóvar exposes its seams through aerial shots. Its artifice is part of the text, perhaps meant to suggest how the woman’s world feels unreal to her. Maybe meant to imply her hurt feels are only valuable to her as performance. Agony without an audience is pain without purpose. Over the phone, her tone is initially airy, feigning an attitude she hopes will please her runaway lover. But as the conversation turns, her tone grows fragile, then furious. Into the receiver, she pours her soul, broken and bleeding and begging for relief.

In this way, The Human Voice feels like an Almodóvar film distilled to its essence. At its center is a strong but battered protagonist fighting for love in a way messy yet achingly human. She lives in a world of color, fashion, and passion. Her home is draped in striking paintings of unapologetic nudes. Her shelves littered with eye-catching baubles. Swinton changes costumes more times you might guess, including tossing on wardrobe anarchy: gold sequin pants, a floral turtleneck, a plaid flannel, and a hulking leather jacket. (Spoilers: it is stunning!) She cries and snarls, sighs and stares into the mid-distance, and is mesmerizing in every moment. Thus, when it comes to the woman’s final act of rebellion, your heart is in your throat, knowing she is capable of anything, for better and for worse.

Simply put, The Human Voice is extraordinary. Swinton is riveting, wrecked and ravishing. Almodóvar celebrates cinema and the power of performance not only by filling his frames with visual panache but also by revealing the artifice that is the foundation for film’s authentic ache. Wrapping together performance, passion, and visuals powerful and provocative, these two collaborated to give us a remarkable gift, to remind us what magic might still be found in movies.

New York Film Festival runs September 17 to October 11. For more on how you can participate, visit the NYFF website.

← Twitter Reacts To News Of Rick Moranis Being Attacked In NYC | Review: 'Save Yourselves!' Makes The End Of The World Pretty D*mn Funny →