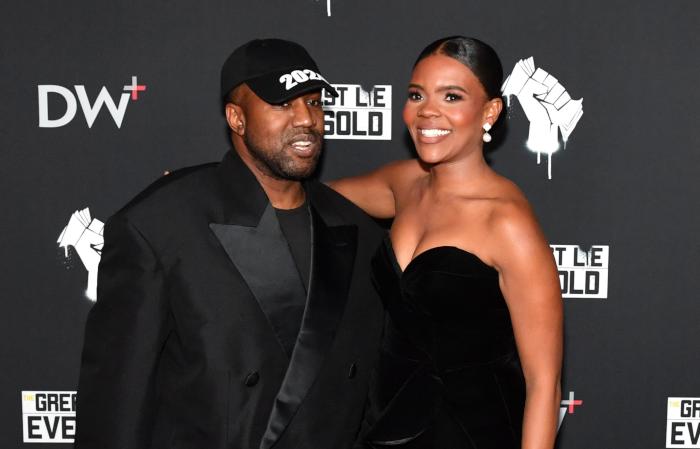 Kanye West has had a busy week. He was kicked off Instagram and Twitter for antisemitic threats. In footage edited out of his interview with Tucker Carlson, he echoed the beliefs of Radical Hebrew Israelites (and, more damaging to Fox News, he admitted he had been vaccinated). Over the weekend, he claimed that George Floyd was killed by fentanyl and not by the cops (while also railing against the “Jewish Media”).

The interesting thing here is that this round of Kanye controversy kicked off when he wore a White Lives Matter T-shirt alongside his new best friend, conservative grifter Candace Owens. But now that he’s been “silenced” (and by that, I mean: He makes headlines every 10 minutes), West has decided to acquire the third-rate social media platform, Parler. The deal is expected to close by the end of the year.

Parler, of course, is where a number of TFG supporters gathered to make plans for the January 6th insurrection. It was subsequently booted by Apple and Google app stores, while also being kicked off of Amazon’s servers. It’s apparently been restored to the Google and Apple app stores, although now it has competition from several other conservative Twitter clones, like Gab, Truth Social, and Gettr.

What’s interesting here is that the CEO of Parler is George Farmer, the husband of Candace Owens, who I suspect is trying to unload an otherwise worthless social media platform onto another wealthy narcissist with a persecution complex and a lot of money. Kanye is not going to be able to resurrect Parler. No one can resurrect Parler. Farmer, by the way, is a Brexit-supporting, blue-blooded right-wing UK conservative and hedge-fund manager (his father is a member of the House of the Lords). Details regarding the purchase amount have not been released, but you can bet that Kanye paid far more for it than what it is worth. There is also a 30 percent chance that — like Elon Musk — Kanye West will try to back out of the deal before it closes.