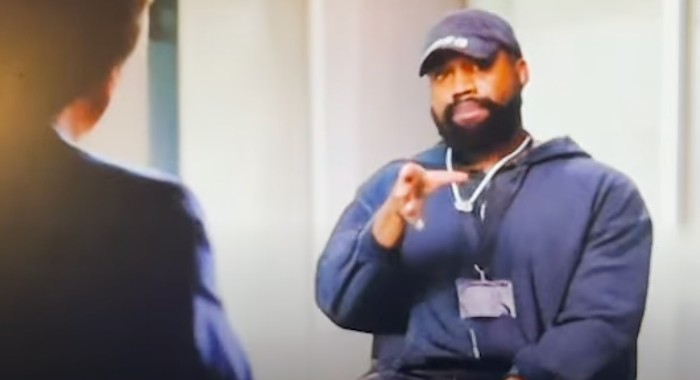 Following Tucker Carlson’s two-part interview with Kanye West, where Carlson praised him for being a brilliant “anti-woke” voice, someone has leaked unaired footage from their discussion. To the surprise of no one, the deleted portions do not show a brilliant voice but instead, a wildly conspiratorial individual who thinks someone is placing fake children in his house and that God is giving him visions of “kinetic energy” cities. Also, Kanye admitted he got the COVID vaccine, and naturally, Tucker can’t have that getting out there. (Vice)

Both Keanu Reeves and director Todd Field have exited Hulu’s The Devil in the White City series, so that can’t be good. (Lainey Gossip)

The Rock is done threatening to run for president. (Celebitchy)

Jonathan Majors has risen from indie standout to blockbuster villain in the Marvel and Rocky Cinematic Universes. None of it came easy, which is exactly how he likes it.

From James: In today’s least surprising news, a MAGA man lied when he said Antifa burned his trailer and has just pled guilty to wire fraud. (Twitter)

How is Dr. Oz so bad at this? Seriously? (Uproxx)

From Roxana: An update on The Watcher now that Netflix is making the New York Magazine story into a series. (The Cut)

Joe Biden loving his son is not a scandal. (Jezebel)

Narfna struggled to review Zoraida Córdova’s The Inheritance of Orquidea Divina, because it was so good. "I just don’t want to try and put words to the subconscious magic this book can work upon a reader." Have you read anything in celebration of Hispanic Heritage Month? (Cannonball Read 14)


← The Trailer for 'M3GAN' Will Bury Your Body and Swallow Your Soul | Late-Night TV Is Dying, But Where Will that Leave Seth Meyers? →