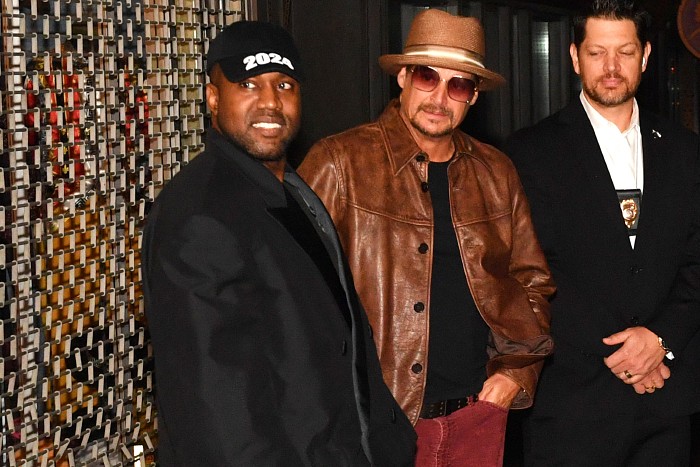 Kanye Is Telling People That Fentanyl Killed George Floyd and, Wait, Is That Kid Rock? C’mon

Chris Evans is scruffy for Santa on the set of Amazon’s Red One. (Lainey Gossip)

Seth Green claims Bill Murray threw him in a trash can when he was only 9-years-old for sitting in his seat. (Dlisted)

Is Elon Musk finally being investigated over this whole ‘buying Twitter’ mess? (Celebitchy)

From Kayleigh: This hag does not speak for my country or my gender.

🔺EXCLUSIVE J.K. Rowling, writing in The Sunday Times Scotland, warns Nicola Sturgeon and other MSPs that blame “will rest squarely” with them if any woman or girl suffers sexual harassment/violence due to Scottish government’s new gender recognition law https://t.co/49fbZa8i7n

The voice actress for Bayonetta tells fans to boycott the third game after being offered only $4,000 to reprise her role. (Variety)

The Rings of Power showrunners were the dudes who wrote the Star Trek 4 script that would’ve seen Chris Pine and Chris Hemsworth reunite as father and son. (IndieWire)

From Steven: I do NOT want to know what accidental experiment led to this research being pursued.

A lubricant made from mucus in cow salivary glands has shown promise against HIV and a sexually-transmitted herpes virus in a laboratory study. https://t.co/WS3330AMbc


Mel Gibson is going to testify against Harvey Weinstein? The Mel Gibson? The guy who was recorded demanding sex before the jacuzzi or he’ll burn the house down? Him? (Deadline)
Rian Johnson confirms those Benoit Blanc rumors. (Vulture)
Seth MacFarlane finally got his The Naked Gun reboot starring Liam Neeson. (The Wrap)
What are your good books with bad endings? Zirza enjoyed Laura McHugh’s What’s Done in the Darkness until the last bit. "The story, which had been flowing along nicely, suddenly dials it up to 100 for a few pages before wiping its hands on its apron and asking ‘so what else is happening?’" (Cannonball Read 14)
From Andrew: Courage.

Alex stopped to help save a gunshot victim from bleeding out, he was then given Saint Paul Police Chiefs Award for Valor. He then gave this small speech.