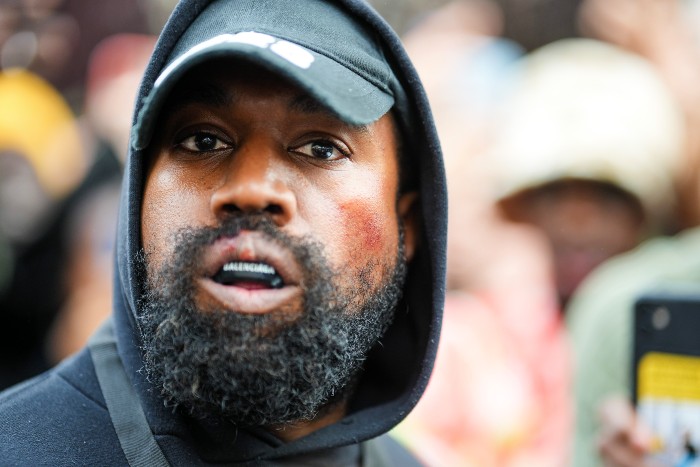 Kanye West Is Big Into Antisemitism Now, Can’t Get Enough of It

Because all forms of extremism inevitably lead to antisemitism, which has never ceased to populate the conspiratorial gap between both ends of the political horseshoe, Kanye West had his Instagram account restricted after accusing Diddy of being controlled by the Jews. Once he realized what happened, Kanye hopped over to Twitter and got that account restricted after he declared “I’m going death con 3 On JEWISH PEOPLE.” Keep in mind, all of this went down after going on Tucker Carlson, where Kanye was treated as an anti-woke truth-teller. They really love him over there, and it looks like he gave them an encore. (Buzzfeed)

Michaela Coel showcases Ghana in Vogue cover article and in the photos as she promotes Black Panther: Wakanda Forever. (Lainey Gossip)
Ezra Miller is still shooting scenes for The Flash in case you’re wondering if that Vanity Fair exposé had any effect on anything. It did not. (Dlisted)

Kate Middleton had a “wakeup call” about Meghan Markle. (Celebitchy)

From Jen: A thread about Oscar Isaac:

Sitting down for the Oscar Isaac spotlight panel at #NYCC. Fingers crossed we finally get some news about Inside Llewyn Davis 2! pic.twitter.com/BM368i8Pjh

MATT BERRY DID FIRE COMING OUT OF THE MONKEY’S HEAD WITH GORILLAZ IN TORONTO TONIGHT I CANNOT BELIEVE I GOT TO WITNESS THIS pic.twitter.com/MS6HWrQVMD

Wait. Mike Flanagan was doing an adaption of Something Is Killing the Children and now he’s not? Damn you, Netflix! That said, let me go ahead and plug the books, which are great and I’m so not a horror guy. Erica Slaughter is easily a Top 5 comic book character, and I’m amazed more people aren’t talking about her. (The Wrap)

LOL. Facebook can’t get its own employees to use its stupid metaverse. (The Verge)

Happy birthday to R.L. Stine! For a lot of Cannonballers, he was a formative author. As Classic says in a recent review of The New Evil, an installment of the Fear Street series, "I do love that when I think of Christmas these days, my first thought goes to crazed killers though. Reading R.L. Stine as a teen will do that to you." Did you grow up on his books? (Cannonball Read 14)