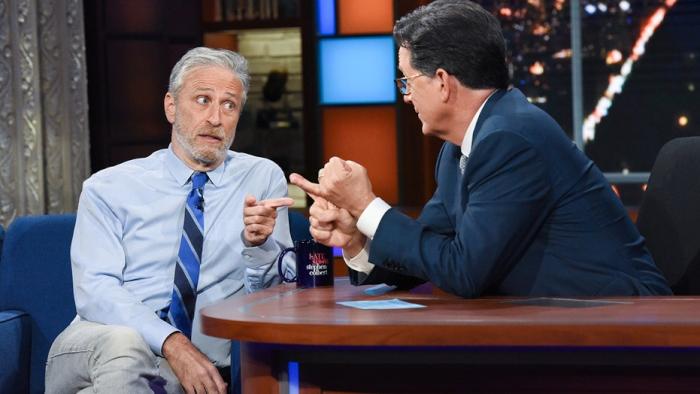 You're Breaking My Heart, Jon Stewart

I thought it was pretty revealing yesterday when Kevin Hart — referring to cancel culture — noted that he’d been canceled three or four times already, which is funny because that’s not how cancellation works. You know who got canceled? Michael Richards (kind of — he did appear on that Seinfeld reunion on Curb)! And deservedly so! He did something unforgivable and cancelable (and yet, still appeared on that Curb reunion).

I’m not here to get too deeply into cancel culture again, we’ve been here, and anyway, the Michael Richards example is closer to “firing an asshole” than “cancel culture.” But we do live in a culture where we are learning a lot more about celebrities than we used to — mostly because they’re revealing more about themselves — and for consumers/audiences, or whatever you want to call us, I think it’s less about “cancelation” and more about, “How many flaws are we willing to accept?” before we jump ship. Because the people raving about how cancel culture will be the ruin of us are right about one thing: We are all flawed. If you put your words and actions out there for public consumption, you will invariably say something dumb or stupid or wrong, and you will get called on it.

But being disappointed in someone and canceling them are two entirely different things. Yesterday, Brian wrote a terrific overview of the colorism debate in In the Heights, and after reading it, I felt disappointed with Lin-Manuel Miranda. Does that mean he’s canceled? No. The same with John Chu (Crazy Rich Asians is one of my favorite romcoms ever). Taika Waititi is dating the problematic Rita Ora. That’s disappointing, but I’m obviously still going to run out and see Thor: Love and Thunder, and I cannot wait to see Reservation Dogs on FX. Matt Damon? He said a lot of disappointing things five years ago (and has since learned to keep his mouth shut), but I’m still gonna watch him in Tom McCarthy’s Stillwater. There’s a difference between being disappointed in someone’s words and actions, and writing them off.

All of which brings us to Jon Stewart. Here’s a guy I’ve always respected and admired and looked up to for decades, but goddamn, he has been proven to be disappointing on more than a few occasions. The Wyatt Cenac situation? Super disappointing, even more so because he’s never really resolved it. The fact that he was something of an asshole behind the scenes of The Daily Show? Disappointing! Jon Stewart’s dated, irrelevant, tone-deaf movie Irresistible? A major bummer!

And then on Monday night, Jon Stewart appeared on Stephen Colbert, and this happened:

I realize that I’m a day late on this, but that’s because I didn’t actually watch the clip yesterday. I read a lot of headlines like, “Jon Stewart goes all-in on the lab leak theory,” and I just assumed it was a joke, that Jon Stewart must have been playing a Colbert Report-like character, and that this was all for laughs. I did not consider for a moment that Jon Stewart had actually lost his goddamn mind.

And maybe it was a joke? But I really, really don’t think so, especially knowing that there was apparently more to that conversation that Stephen Colbert and CBS edited out. Even if it was for laughs (it wasn’t), Trump supporters are now citing … Jon Stewart to support their conspiracy theories. We are in a dark place.

Needless to say, this was hugely disappointing. Does this mean Jon Stewart is canceled? It does not. What it does mean, however, is that I have lost a lot of faith and trust in Jon Stewart, and because currency for Jon Stewart — and his forthcoming Apple TV+ show — is faith and trust, I feel considerably less interested in what Jon Stewart has to say. Is that a cancellation? No, it’s disinterest, with a side of heartbreak.


← Harvey Weinstein Will Be Extradited to Los Angeles to Face Rape Charges | Will 'Hacks' Have A Season Two? (Also, 'Loki', 'Mythic Quest', And More On Podjiba!) →