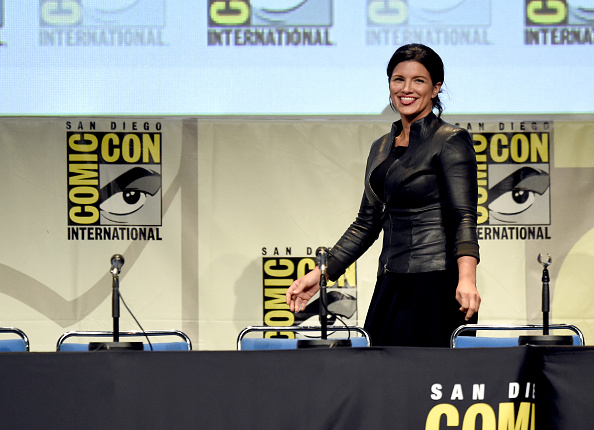 There's a Difference Between 'Cancel Culture' and Firing an A$$hole

Over on her substack this morning, Bari Weiss interviewed Gina Carano about being fired by Lucasfilm for “being a conservative,” which is essentially what Jonathan Chait also argued last week. Both Chait, who is progressive, and Weiss, who is not, argue that the treatment of Carano by Lucasfilm resembles McCarthyism. Neither defend Carano’s decision to post and/or share antisemitic memes, but both argue that people should not be held accountable if there was no “intent.” Weiss even asked Carano if there was antisemitic intent behind a recent meme she posted to Twitter:

“I was in utter shock and confusion when certain people said it was antisemitic,” Carano told Weiss. “Then, as I went to take it down, I noticed that the image was not the same as the one people were referencing. I was honestly confused: should I take it down, or leave it up? I still don’t know the answer to that question, because taking it down only makes the mob attack you more.”

“The image for me was a statement that people need to stand together and rise up, stop being so manipulated by the powers that believe they know what’s best for you and play games with our lives,” she wrote. “My heart has only ever had ultimate respect and love for the Jewish community.”

As a refresher, this was the image Carano shared: 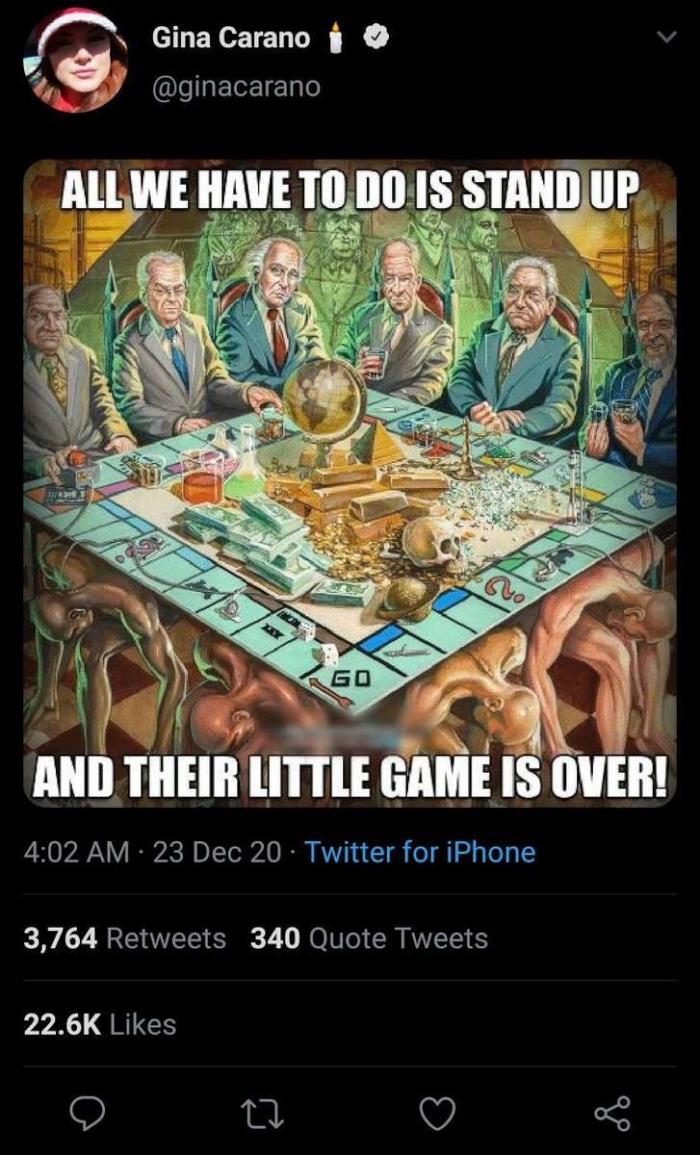 To be clear, both Weiss and Chait recognize the antisemitism in the meme (how can you miss it?), but both argue that Carano should not be held responsible for something that she does not understand. “A well-trained analyst would recognize how easily its theme of a sinister global elite maps onto anti-Semitism,” Chait writes. “But is that a fair expectation of somebody who doesn’t work in politics?”

I guess my question is this: If not antisemitism, what do they think that Carano really meant by these memes? Or the clear transphobia. Or the COVID conspiracies? Or the anti-mask rhetoric?

Carano was shitposting, which she’s been doing for the better part of a year. It’s been reported that Disney has been looking for a solid excuse to fire Carano for months, apparently (they canceled plans for a spin-off that would have included her character in November), and the most recent antisemitic meme gave them the justification they needed.

But let’s also be clear that it wasn’t the one antisemitic meme last week, or the one from a few months ago that got Carano fired. Nor was it her conservative beliefs. Carano got fired for engaging in a months-long shitposting campaign. She has been deliberately f**cking with people, and finding a level of glee in doing so.

You know what employers hate? Having hundreds or even thousands of people demand that they answer for their employee’s misbehavior. It sucks, and that’s why a lot of newsrooms, a lot of schools, and a lot of private companies have social media policies, which basically ask that you not make yourself a nuisance to the employer. Remember last month, a freelance writer for the New York Times was purportedly let go from her position for saying that she had “chills” when Biden was inaugurated. Did she get let go for saying that? Or did she get let go because a whole lot of Republicans harassed the Times into not renewing her contract?

If you work for a private company, you are expected not to be more trouble than you are worth. Disney is one of the biggest corporations in the entire goddamn world. It is not in the business of defending abhorrent speech. It is in the business of making Star Wars and Marvel products for people of all ages. They don’t want to deal with Gina Carano’s shitposts. She became more trouble than she was worth.

All of which is to say: If you want to shitpost, you have every right to do so. But a private company has every right to disassociate itself from assholes. Carano’s intent may not have been antisemitic (although, I doubt that), but her intent definitely was to be an asshole to those with whom she disagrees politically — to own the libs. Conservative, liberal, or otherwise, an employer is under no financial, moral, ethical, or constitutional obligation to employ an asshole.


← Review: Colin Firth & Stanley Tucci Light Up The Sky in 'Supernova' | Review: 'Breaking News in Yuba County' Is a Terrible Title for a Terrible Movie →