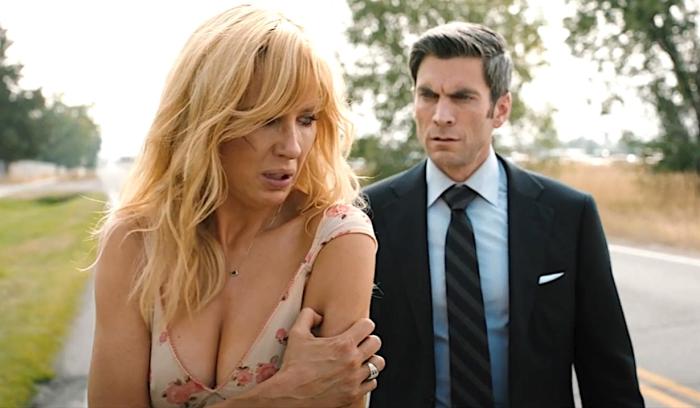 'Yellowstone' Sets Up an Intrafamily War in the Fifth Midseason Finale

Taylor Sheridan’s Yellowstone wrapped up the first half of the fifth season this week with a momentous episode that puts Jamie Dutton on a collision course with Beth Dutton and the rest of the Dutton family. Jamie, as attorney general, has been working with Governor Dutton’s enemies this season, and sleeping with one in particular, Sarah Atwood. Atwood and Jamie concocted a plan to impeach the Governor so they could push through the airport project that John Dutton ran for Governor to cancel. The impeachment scheme worked, inasmuch as the Senate agreed to impeach Dutton over what Jamie called the loss of billions of revenue for the state.

Upon hearing about the impeachment (from Beth’s new frenemy, Summer), Beth broke into Jamie’s house to confront him, thinking that she had the leverage necessary to force Jamie to resign. She knew Jamie had murdered in the past, and she knew where the body was buried. However, Jamie called Beth’s bluff and told her that he used the same place to bury his bodies that his father and the rest of the family have for generations. It’s called the bus stop, and what Beth may not realize just yet is that her husband, Rip, is responsible for burying a number of those bodies.

Beth reasons to her father that the only way to prevent mutual destruction is to have Jamie buried at the “bus stop.” Jamie, sensing his sister’s move, speaks to Sarah about finding a hired killer who knows how to make it look like a heart attack or an accident. The episode has some real Dallas/Dynasty/80s soap opera vibes. I’m not mad at it. Beth and Jamie have been having the same argument for seasons, so I’m at least glad to see that it will come to a head, even if it does result in the death of one of them. Jamie has been bullied by the family for so long that I’m not so-secretly-rooting for him, except for the fact that I know that Rip will probably be tasked with murdering Jamie and if Beth dies, I could not handle what it might do to Rip emotionally.

Meanwhile, Rip and his people are en route to Texas with the cattle, where they plan to live for the next year so that the cows can graze (Beth’s tentative plan is to sell that cattle for beef). The time away is going to be hard for Colby and Teeter, but not so much Beth and Rip because she plans to visit frequently. While they’re away, John Dutton did what he does, and successfully convinced Monica to move into the East House with Kayce and oversee the ranch while Rip and Co. are in Texas and John is in Helena doing Governor things. Kayce has been weirdly sidelined for most of the season (and even Monica has gotten more screen time).

Finally, the episode continued to tease the 6666 spin-off, featuring a day in the life of Jimmy and his girlfriend, Emily, on the famed Texas ranch. That series has been in development for a year-and-a-half now, and we still don’t know when it will air on Paramount+, but Yellowstone does a good job of reminding us periodically that it is still a thing.

That’s it for the mid-season finale. The series is pulling a The Walking Dead and returning with the back half of season five this summer, six months from now. It’s annoying, but having Yellowstone around twice a year is a good way to launch new shows. Hopefully, 6666 will be one of those series it launches when it returns in the Summer. What Yellowstone has done successfully that The Walking Dead could not, however, is launch excellent spin-offs, including 1883 and 1923, which are arguably better than Yellowstone itself.

Here’s a teaser from Paramount that gives us zero footage from upcoming episodes.


← Ed Helms Once Turned Down A Job Working For Conan O'Brien | Box Office Report: 'Avatar: The Way of Water' Stays On Top Against 'Puss in Boots 2' →