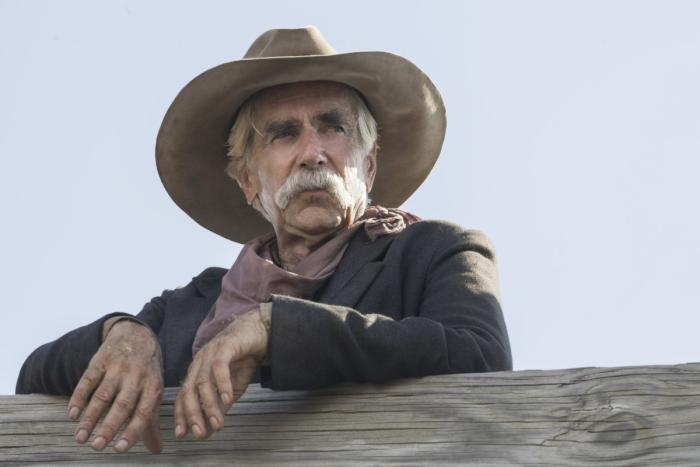 I genuinely like Taylor Sheridan’s Yellowstone, the highest-rated least talked about show on television. It is good TV, an unflinching drama about one family doing whatever it takes to hang on to the family ranch. There’s a lot of ranching porn — there’s at least one montage of cowboys and horses set to a country song in every episode — but it’s gripping, well-acted television that also suggests that harsh and violent elements of the Old West still exists in contemporary Montana. It is essentially Succession set on a ranch, and like the Roy family, the Duttons also exist above the law.

The ranch in Yellowstone, however, has a mythic quality that always felt unearned. Why do the Duttons cling so unmercifully to a piece of land and a dying industry? What is it about their home that warrants so much bloodshed and acrimony? The prequel, 1883, sets about answering that question, and while I’m reluctant to say this after only two episodes, the prequel may be superior to the parent series.

1883 is the story of the struggles the Dutton family undertook to claim that land in Montana. It starts in Texas, where the Dutton family begins a journey west through the Great Plains and the “last bastion of untamed America.” I think maybe the best way to describe it may be: Deadwood, if Deadwood were a road trip movie. It is harsh and unrelenting, and two episodes in, I’m already beginning to understand why the modern-day Duttons are so hellbent on maintaining their land. It’s because of what James Dutton (Tim McGraw) and his family sacrificed and endured on their trek across the Great Plains, although as Dutton’s daughter Elsa (Isabel May) says, there is nothing “Great” about them.

It is a bleak drama, and I do not say that lightly. To wit: The story opens with a grieving Shea Brennan (Sam Elliot) carrying his dead daughter up the stairs to the bed of his dead wife — both of whom succumbed to smallpox — and lighting his house on fire. After, he puts a gun to his chin and contemplates taking his own life, while his partner Thomas (LaMonica Garrett) asks that if he’s gonna do it, do it before nightfall so he doesn’t have to dig a grave in the dark.

Shea opts against killing himself, for now, although he’s at a point in his life where he doesn’t care if he dies or not. He decides, however, that he’d like to see the West one more time before he passes, so he and Thomas begrudgingly agree to lead a large group of German immigrants — with no experiences with the lawless west — across the Plains.

He’s eventually joined on this trek by James Dutton, his wife Margaret (Faith Hill), their daughter Elsa, and five-year-old John Dutton (Audie Rick), who I gather is the grandfather of Kevin Costner’s character in Yellowstone. James is a former Civil War soldier who lost his entire platoon and was imprisoned by the Union army for three years (and Tom Hanks — the Tom Hanks — plays a Union General in a brief but impactful flashback). James is a dreamer who has big ideas about moving west, so he leads his seemingly well-to-do family on this journey. He forms a mutual agreement with Shea to help him lead the immigrants across the plains. They need an experienced cowboy with firearms skills, and after Elsa is nearly raped by a drunken lout (before being shot dead), James reasons that he needs the protection of a large group of people as his family makes its way West. Elsa, meanwhile, has the same idealistic qualities as her father, although it’s clear that the trip may rob much of that from her (if not also her life, as is teased in the series’ opening scene). They will encounter disease, bandits, and Natives, and I am sure that most — if not all — of the immigrants will fall prey to one or the other.

I can’t quite place my finger on what it is about Taylor Sheridan’s work that I find so captivating, but the first two episodes of 1883 — written by Sheridan — are up there with his best work (his best work being Hell or High Water). It’s like Darabont’s The Walking Dead without zombies — and it’s interesting to consider how similar post-apocalyptic America is to the Old West. Sheridan traffics in all those Western themes for which he is so well known but keeps the stories squarely centered on the characters. Tim McGraw and his real-life wife Faith Hill are surprisingly excellent in their roles; Sam Elliot is Sam F***ing Elliot, LaMonica Garrett has a strong but quiet presence, and even Billy Bob Thornton — who appears as a nasty gunslinging lawman — steals what little screentime he’s had so far. It’s Isabel May, however, who commands the screen, even if the voiceover she provides is unnecessary. She is the feisty, bad-ass precursor to Kelly Reilly’s character in Yellowstone.

The series is also cinematic as hell, thanks to the cinematography of Christina Voros and Ben Richardson, the latter of whom worked on Sheridan’s Yellowstone and Wind River, as well as Mare of Easttown and Beasts of the Southern Wild. It’s worth noting, too, that knowledge of Yellowstone itself is completely unnecessary — the shows are separated by two generations, at least — although watching 1883 may increase one’s interest in the parent series. Two episodes in, and I genuinely can’t stop thinking about it.


← Review: Joel Coen's 'The Tragedy of Macbeth' is an Impeccably Stylish Act of Mimicry | Review: 'Being the Ricardos' is Another Reminder that Aaron Sorkin Just Can't Help Himself →