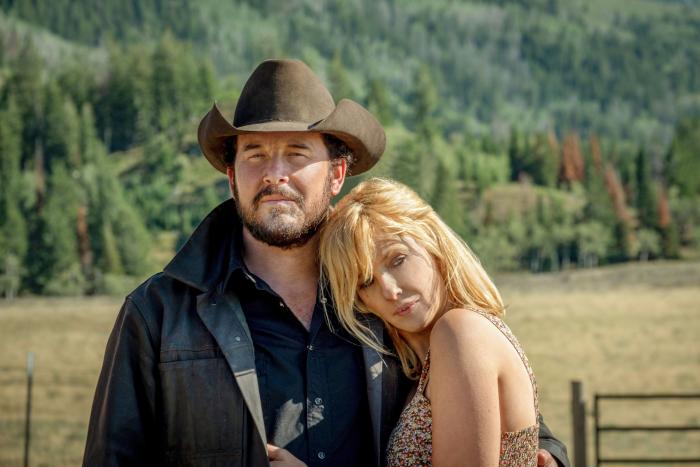 'Yellowstone' Finale: A Ranch Hand Must Die So That a Dutton May Live

We haven’t talked about the third season of Yellowstone all year long, because Yellowstone doesn’t seem to appeal to that many outside of the Dad demo, which is apparently rather significant, since Yellowstone is the highest rated show on cable these days. Honestly, I came for Taylor Sheridan (Hell or High Water, Sicario), but I’ve stayed for vulnerable Cole Hauser, because Luke Grimes has a Taylor Kitsch thing going on, because Wes Bentley’s Jamie is the worst, and because Kelly Reilly finally landed the role she was born to play: Gemma Teller in a Western.

It’s been a quiet season and, honestly, that’s the way I like it: Yellowstone is best when it bathes in a mood, and the mood of this season is of a rattlesnake quietly slithering through the desert. There’s always a danger lurking around the corner, but the snake has looked well fed and sated, at least until the last 4 minutes of the season finale, when that rattlesnake started erratically striking at everything in its presence. In the course of 120 seconds, a bomb blows up in Beth’s office; gunmen barge into Kayce’s office with guns a blazin’; another gunmen shoots John Dutton in the chest; and Rip has to shoot a horse in the head after someone else injured it.

Who lived? Who died? Who tells the story? I think it’s fair to say that John Dutton (Kevin Costner) survives, because we see that his iPhone blocked a bullet before the credits rolls (also, he’s Kevin Costner); if they were going to kill off Beth, it would’ve been her who opened the box with the bomb inside instead of her assistant 15 feet away; and if Kayce were going to die, we’d have seen him shot, rather than ducking behind his desk with a gun.

A Dutton child died in the pilot episode. They’re not going to kill off another one, and if they had to, it’d be Jamie, but they set him up too perfectly to play the season four villain to write him off anytime soon. He might be behind the ambush, however, because earlier in the episode, in a conversation with his biological father (hello Will Patton!), the advice he received was to “kill the king.” A family ambush would fall under that category. It’s possible that Jamie put out only the hit on his father, but it’s unlikely that Jamie would order the death of Kayce, with whom Jamie still has a functioning relationship. On the other hand, Jamie is clearly working in cahoots with Governor Perry, and earlier in the episode, a group of powerful cattlemen came to Kayce with the idea of putting him up for Governor.

Still, this doesn’t quite feel right, especially when Roarke (Josh Holloway) and Willa (Karen Pittman) are such obvious suspects. Willa, after all, asked Roarke to take care of this like an oil well takeover in Yemen. That sounds like bombs and assassins would be involved, and Willa and Roarke — who are trying to take over Yellowstone by eminent domain, but have been repeatedly thwarted (by Beth, by Rainwater) — obviously have the motive to launch an ambush.

So, no: I doubt any of the Dutton children will die. However, what is being completely overlooked amid all this drama — besides Rip’s conversation with his mother’s dug-up corpse — is the fate of Jimmy Hurdstrom (Jefferson White), who began the season by being thrown off a rodeo horse and nearly killed. He ends the season unconscious after climbing back on a rodeo horse and being tossed again. After mulling Yellowstone for nearly 10 months before it returns in June, fans are going to want blood, and Jimmy will have to be the sacrificial lamb in lieu of the Duttons.

Jimmy must die so that Beth may live.

← 5 Shows After Dark: 'I May Destroy You' First Season Finale HBO, 'The Republican National Convention' | Sofia Vergara Wants the Jokes About Her Accent Left Out of the Ellen Debacle →