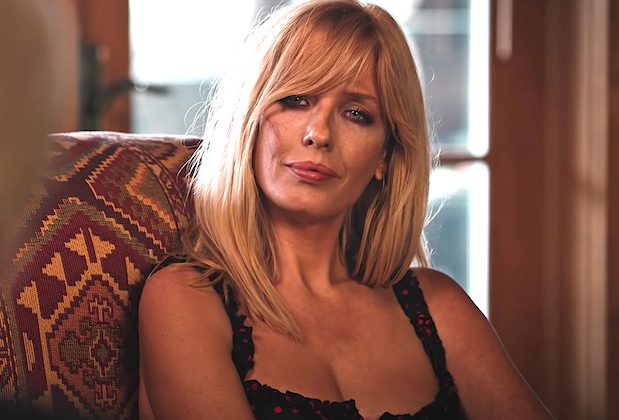 The Problem with 'Yellowstone' Isn't the Nonexistent Plot, It's the Static Characters

The big complaint this week was in the silly 10-minute brawl between Beth and Summer. The two beat the holy living shit out of each other because Summer (Piper Perabo) — a vegan — complained about the meat options for dinner on a cattle ranch. The whole scene under the right lighting could’ve easily been played as a comedy, right down to Beth’s husband, Rip, opting not to break up the fight but instead speed it up by allowing the two women unobstructed punches to the face (but not before Rip lectures Summer on complaining about meat when people around the world are starving). The whole sequence was like a caricature of a hippie liberal as constructed by Ted Cruz. The best part, though, was that perpetually moody and/or grieving Monica actually laughed, but only because of the dinner-table awkwardness before the brawl broke out.

But I’m not here to complain about the fight. The rest of the Internet has done plenty of it. My issue has more to do with the storyline that framed the episode, and how John Dutton was going to invite the media and “show the world what we are and what we do.” What exactly is it that they do?

Based on the instructions that John Dutton — both the younger version played by Josh Lucas in the beginning of the episode, and the older one played by Kevin Costner at the end of the episode — here’s exactly what they do: “We’ll ride up along Mount Chisholm, push them down to Lewis Creek, and hold ‘em in the meadow overnight. If we’re lucky, we’ll get ‘em all in one drive.” What the ranchers — led by John Dutton, now the goddamn Governor of Montana — are doing is branding the cattle, but the mission, so to speak, is basically a MacGuffin.

We don’t see the ranchers ride up along Mount Chisholm or even brand the cattle. We see a group of cowboys trot out toward the mountains while big swelling music plays and the women left behind — in this case, Summer and Monica — cry as though their men were going off to war. They’ll be gone for only two days, although the longing goodbyes and the dramatic, foreboding music would suggest otherwise.

That’s the A-plot (I think), but it’s hard to say what the episode is really about: John Dutton decides to cancel the meetings he’s supposed to take as the Governor of Montana and ride out to brand cattle, but the night before, Beth and Summer get into a knock down drag out fight over the vegan’s lack of appreciation for grilled dove, the bird of peace. Somehow, that takes up an hour, and the plot barely advances, although it’s unclear if a plot even exists to advance. We’re five episodes into the season and what exactly has happened, so far? John was elected Governor and Monica lost her baby in the first episode, but beyond that, there are some wolves attacking cows, Beth and Jamie are recycling their same storyline, and Rip sure does love Beth, same as always. John hates being Governor, Kayce has been reduced to next-to-nothing, and another woman is using sex to turn Jamie against his family because women on this show are basically only good for f**king and fighting (when Summer is not fighting Beth, by the way, she’s f**king John).

Taylor Sheridan has repeated the same quote dozens of times over the years, and it’s something along the lines of, “I write simple plots so that I can focus on the complex characters.” That’s fine until the characters themselves stop advancing. We haven’t learned anything new about these characters in a couple of seasons now; all they do is repeat the same mistakes and get into the same arguments. Sheridan might want to consider throwing some plot at them to see how they handle it.


← 'Christmas Bloody Christmas' Is Not as Cool as It Wants You To Think It Is | Are You Looking for a Good Television Mystery Recommendation? →