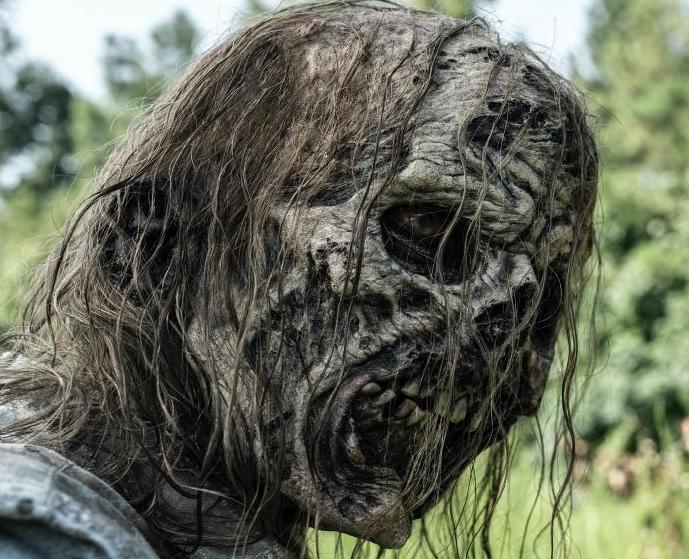 After 11 seasons and 172 episodes, the zombies on The Walking Dead have finally evolved just in time to … wrap up the series. However, for a “game-changing” new variant, the introduction was not only decidedly lackluster but felt like a scene inserted last-minute to further The Walking Dead universe rather than add anything to the show itself. I’ll be surprised if we see these variants again in the last few episodes of the series. Even if we do, I’m not sure it would matter.

What’s so different about the new variant? Aaron, Jerry, Lydia, and Elijah (the latter two of whom are now sweethearts) decide to take a side excursion to check on Oceanside (remember Oceanside? That’s where TWD hides characters who leave the show but who it doesn’t want to kill off, e.g., Dan Fogler’s character). En route, they find the location of an abandoned Renaissance Faire, where they’re surrounded by 50 or so walkers.

These walkers prove to be too difficult for the four of them to pick off one by one, so they seek shelter in the RenFaire castle. Much to Jerry’s shock, however, they learn that these zombies can turn a door knob! “What the hell?” says Jerry, as the camera lingers on a door knob, which turns out to be one of the season’s more exciting sequences. THE DOORKNOB. IT TURNS.

When they climb to the roof to escape the door-knob-turning zombies, however, they also find a zombie that can climb a ladder and grab a rock! Thankfully, Aaron takes out the rock-grabbing zombie before it kills Jerry because if Jerry dies, we will feign rioting for a few minutes until we get bored and watch a better show.

The new variants — clearly more sophisticated — can’t be that dangerous because, by the next morning, the four of them have managed to kill them all off-screen, which is woefully anti-climatic. If you’re going to introduce a new variant, that variant zombie should at least kill one or two characters to illustrate a new level of danger. Elijah and Lydia — who have been mostly useless to the series this season — were easy pickings. But for some reason, the post-Rick Grimes The Walking Dead seems to hate killing off characters. Now they just hide them in Oceanside.

“I’ve heard stories about walkers like this that can climb walls and open doors,” Aaron says, seeding these new variants into the TWD universe for no other reason than to tease the spin-offs. “I was never sure if they were just stories. Maybe there are other kinds, too. I hope not.” The scene is about as useful as the Thor cave sequence in The Avengers.

There’s at least a 60 percent chance we never see these zombie variants again on the parent series, and a 90 percent chance they will not play a major factor in the last five episodes.

For the curious among you, in the A-storyline, Eugene is blamed for the death of Sebastian Milton, who was killed by zombies during the chaos of the Founder’s Day melee last week. For some reason, the town turns against Eugene, even though the townspeople wanted to kill Sebastian themselves last week. The plot consistency has been lacking.

Pamela decides that she’s going to be pure evil now and round up Eugene and all of his associates and scapegoat them for the death of Sebastian. Mercer reluctantly goes along with the plan to save his sister, Max. In the end, however, Eugene — who spends most of the episode in hiding — turns himself in, confesses, and insists that he acted alone. Meanwhile, Pamela has decided to keep her son as a pet and to make Hornsby feed him with the dead body of Hornsby’s own goon. Pamela has gone full Governor, which would be more interesting if we hadn’t already had a Governor.