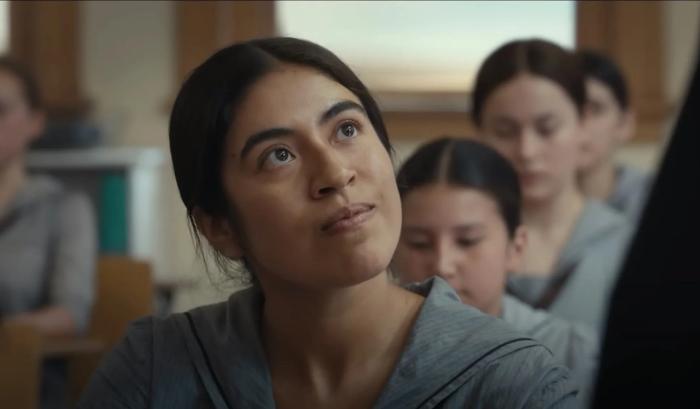 The True Story Behind '1923,' Teonna Rainwater, and Catholic Schools for Indigenous Children

This week was another (unexpected) midseason finale for a Taylor Sheridan series, but with 1923, at least we only have to wait a month for the series to return (as opposed to six months when it comes to the back half of Yellowstone’s fifth season). The good news in the midseason finale is that, though John Dutton III (the second of three of James and Margaret’s children) died, Jacob Dutton (Harrison Ford) managed to survive, because — as he explained — he’s too stubborn to die. The third child of James and Margaret, meanwhile, received a letter in Africa calling him back to the ranch to aid the Duttons in their ongoing war with the sheepherders. Cara Dutton (Helen Mirren) is doing her best stall the conflict until Spencer can return.

In the meantime, each episode of 1923 this season has spent time in a Catholic boarding school for Indigenous children. Taylor Sheridan has worked the stories from the Native population in Montana into each of the Yellowstone series, and this one is particularly dark.

It probably doesn’t show up in a lot of history books, but Sheridan is shedding light on another troubling chapter in American history. In the last 19th and early 20th centuries, the government-funded boarding schools for Indigenous children designed to force them to assimilate into American culture. That meant taking children from their parents and moving them sometimes hundreds of miles away and into boarding schools, where Indigenous children were beaten, abused, and underfed.

The children were also not allowed to wear their own clothes, speak their own language, or even use their own names. Their hair was cut short, and American religious education was forced upon them. The children spent as many as 10 years in these schools, and once they returned to their reservations, they often had difficulty reassimilating at home, leaving them in a sort of cultural no man’s land where they were not accepted by either Americans or the reservations.

As it relates to 1923’s Teonna Rainwater — a descendant of Chief Thomas Rainwater in Yellowstone — bounties were paid for children who tried to run away, which is exactly what Teonna does in this week’s episode, but not before killing the nun, Sister Mary, who had for so long abused her.

Unfortunately, in many other real-life cases, students took their own lives, and in those cases, their classmates often had to dig graves to bury their own friends. Though there will not be a happy ending for Teonna — because there are no happy endings in the Yellowstone universe — she will at least survive long enough to give birth to the grandparent of Thomas Rainwater.

As for Sister Mary, she got what she deserved: Death by Bible (to the face).


← Kevin McCarthy Won Speaker on the 15th Ballot, But Katie Porter Won the Internet | 2022 Was a Good Year For On-Screen Adventurous Girl Warriors →