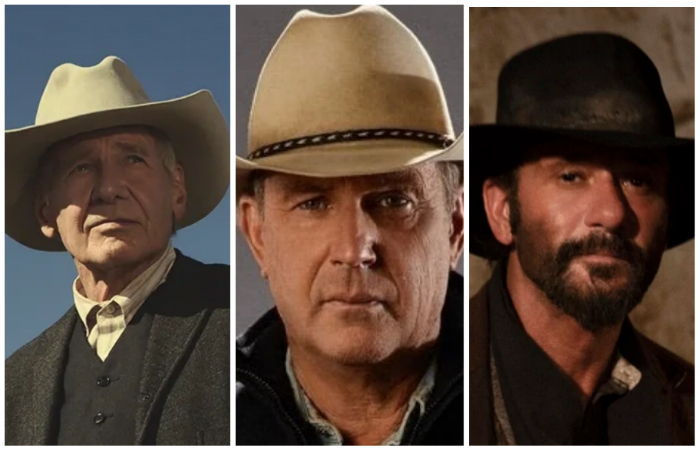 Paramount’s 1923, the second sequel to Yellowstone, will premiere on December 18, and it features a hell of a cast in Harrison Ford, Helen Mirren, James Badge Dale, Timothy Dalton, and Jerome Flynn, among others. It looks solid.

In the first Yellowstone prequel, 1883, we met James and Margaret Dutton (Tim McGraw and Faith Hill), who braved the Oregon Trail and lost their daughter, along the way. They buried her in Montana, in the area that would later become the Dutton Ranch in Yellowstone.

How do Harrison Ford and Helen Mirren’s characters connect with the characters of 1883 and Yellowstone? Ford plays Jacob Dutton, the brother of 1883’s James Dutton. Jacob Dutton, married to Cara Dutton (Helen Mirren), lives on the Dutton Ranch and helps John Dutton Sr. (later John Dutton I) (James Badge Dale) run the ranch. John Dutton Sr. is the eldest son of James and Margaret. James and Margaret had another son after the events of 1883 named Spencer (Brandon Sklenar) who will also appear in 1923.

John Dutton Sr. marries Emma Dutton (Marley Shelton), and they have a child named Jack Dutton, played by Darren Mann. He is 33 but could easily pass for 18-24 years old, so it’s not unreasonable to believe that he’s the son of a character played by James Badge Dale. Jack Dutton will marry Elizabeth Strafford (Michelle Randolph). Jack and Elizabeth are the parents of John Dutton II (Dabney Coleman, seen in the second season finale of Yellowstone), who will be the father to the lead in Yellowstone, John Dutton III (Kevin Costner).

From what I can gather from the trailer, in 1923, Timothy Dalton’s character, Donald Whitfield, buys the neighboring Strafford ranch, the former home of Elizabeth (who will marry Jack), and there is a “range war” between Yellowstone and the former Strafford ranch, and Flynn appears to be Whitfield’s henchman. Got it? Cool.


← Who Is the Cowboy? Who Will Die in the 'White Lotus' Season Finale? | Kirstie Alley Has Reportedly Died of Cancer at Age 71 →