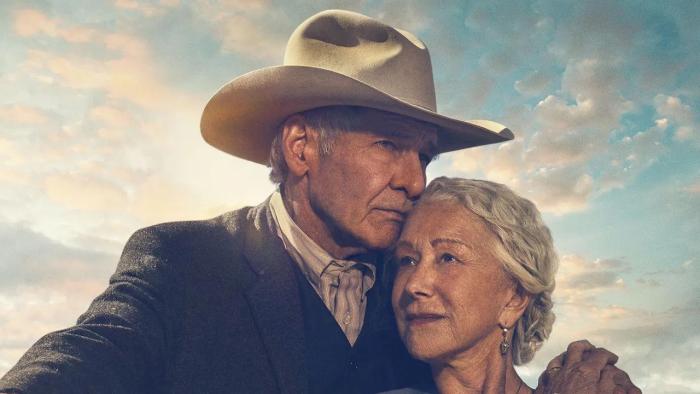 The Riveting Misery of Harrison Ford and Helen Mirren's '1923'

For those of us who have been watching — and mostly enjoying — Yellowstone for the last five seasons, a question that has lingered in the back of my mind is: Why? Why are the Duttons so obsessed with a tract of land? With this way of life? Why are they so obsessed with the land that the patriarch of the Dutton family would run for governor (and win) with only one objective: To kill a proposal for a new airport that would interfere with their enjoyment of the land? These people have literally murdered to maintain a hold over a stretch of land that has brought them almost nothing but misery.

The Yellowstone prequels, 1883, and 1923 (which premiered this week on Paramount+) seek to answer why the land has such a hold over them, and the only thing I can surmise is that it’s a generational sunk cost fallacy. The family has suffered untold miseries and lost countless friends and family members in horrifying ways, and instead of cutting their losses and opening up a nice bakery in Boseman, they insist on continuing the cycle of misery.

I’ll grant that the misery makes for compelling television first in 1883 and now in 1923, with the likes of Harrison Ford and Helen Mirren taking the lead. For fans of the Yellowstone universe, some family history may be helpful, but it’s not necessary to the “enjoyment” of 1923. All new entrants into the universe need to know is that this land is very important to the Dutton family, that a number of family members have sacrificed their lives for it, and that the people indigenous to the land loaned it to them 140 years ago with the expectation that they would one day get it back (that’s undoubtedly story for the sequel, 2063).

The series is narrated by Isabel May, who also narrated 1883 and played Elsa Dutton, the daughter in the original prequel who died from an infection after an arrow dipped in feces, shot by a native, pierced an organ. Hearing her voiceovers triggers a sort of Pavlovian fear that someone is about to die of dysentery or some other horrible disease or calamity. Harrison Ford plays Jacob Dutton, the brother of James Dutton (played by Tim McGraw in 1883), who — along with his wife, Cara (Mirren) — took over the Dutton ranch after James died. They have no children of their own; they are merely overseeing the ranch as the Dutton sons figure their shit out. Isabel May’s narration hints that one of those sons will die.

They are Jack (Darren Mann), who has followed in the family business as a rancher and was set to marry Elizabeth Strafford (Michelle Randolph), but has two weeks of emergency ranching to do before he can say “I do” to a woman who is not-so-secretly already pregnant with his child. The other son is Spencer (Brandon Sklenar). He is suffering from World War I PTSD and apparently living in Africa, where he helps protect tourists (and locals?) by killing dangerous lions and leopards. By the end of the first episode, we’re worried that one of the sons won’t make it to the second episode.

The political intrigue, however, involves Ford’s Jacob. All the grass in Montana has been killed by drought and locusts, which has made it challenging to keep the cattle and the sheep fed. The scarcity of resources is threatening to set off a range war between various landowners. To quell the unrest, Jacob agrees to allow the area landowners to let their cattle graze on his land up in the mountains, although it will require that the cattle be supervised because of the bears. However, when Jacob and the other cowboys arrive, they discover that a sheep owner, Banner Creighton (Game of Thrones’ Jerome Flynn), has already squatted on Jacob’s land.

It looks like a range war is in the making, and if Isabel May’s narration is any indication, the events of the season will leave the family minus one son and the Dutton ranch on the precipice of ruin. I don’t understand exactly why I’m so enthralled by the promise of more misery, except that Sheridan builds interesting universes with well-drawn characters from different times confronting challenges that are novel and interesting to me and a present time when superhero stories are otherwise so dominant. In Yellowstone and in 1923, the land is both the hero and the villain, and the technology did not exist then nor does it exist now to completely tame it. That is oddly thrilling. Having Harrison Ford and Helen Mirren along for the ride is just gravy.


← Melanie Lynskey, Indie Culture, and the End of the Pajiba 10? | Can A Cage-less, Disney-fied 'National Treasure' TV Series Even Work? →