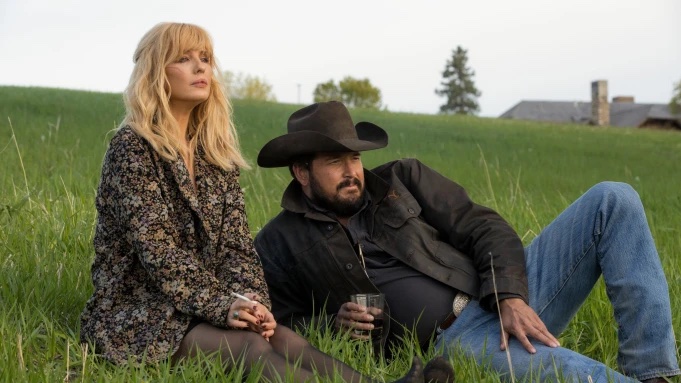 I’ve spent the last few weeks complaining about the fifth season of Yellowstone, but it’s worth noting that my complaints have been rooted in what is to be expected of a traditional television show, things like plot and character development. Yellowstone, however, is not a traditional television show, and this week’s episode was one of its worst when it comes to plot or character development, but one of its best when it comes to just being Yellowstone.

More than anything, Taylor Sheridan’s series is about romanticizing a certain way of life, a way of life that John Dutton is so determined to keep that he ran for governor on the slogan “Progress stops here” and he won. I have little connection to this way of life — roping, herding, rodeoing — but it is hard not to get swept up in Sheridan’s romance for the land. Watching cowboys and cowgirls (cowpeople?) ride through picturesque valleys and through the mountains set to Chris Stapleton, Willie Nelson, or Jason Isbell songs is oddly transfixing television.

That was on full display in this week’s episode of Yellowstone, where John, Rip, Beth, Kayce, and his son (as well as the ranch hands) herded a bunch of cattle for two days so that they could be branded. I don’t know the first thing about branding cattle, but watching Beth and Rip fawn over meadows and springs before tearing each other’s clothes off is not a bad hour of television.

That’s largely what this episode was devoted to, up and until an old cowboy died in his sleep, which the series telegraphed last week. It didn’t matter. That’s not what it was about. What it was about was giving Kevin Costner an opportunity to look out into a morning sunrise with dewy eyes and say things like, “Couldn’t think of a better death if you paid me. You sure earned it, old friend.” Or:

“Life ends, that’s part of it. His ended good. I refuse to be sad about it.”

“He didn’t wake up, he just died on the trail. Like every cowboy dreams of.”

When his crying wife asked how her husband died, Dutton responded, “Like a cowboy should. Head rested against the saddle, staring at the stars with his eyes closed.”


That’s Yellowstone to a tee. You almost want to roll your eyes, but you’re too swept up by the emotion of that Kacey Musgraves song and Costner’s gruff but tender delivery that you can’t help but to fall prey to its manipulations.

“Every summer there’s fire, and every winter there’s blizzards,” Monica Dutton tells Summer, the city-slicking vegan. “One cleanses the forest, and one protects it, and feeds its rivers in the spring, which feeds the valley. But those two things happen in the city and they’re devastating. Because cities are the opposite of nature. They defy it, which is why they always crumble.”

Yellowstone plays lip service to plot and character development, but truly it’s just a vehicle for Taylor Sheridan’s cowboy aphorisms. Weeks like this, it’s hard to be mad at it because all these goofy cowboy grins are a reminder of what they are trying to protect when these characters get into ridiculous brawls and murder people. As Rip says to Beth — and it may as well be Sheridan talking to critics — “shut the f**k up and watch the sunset.”