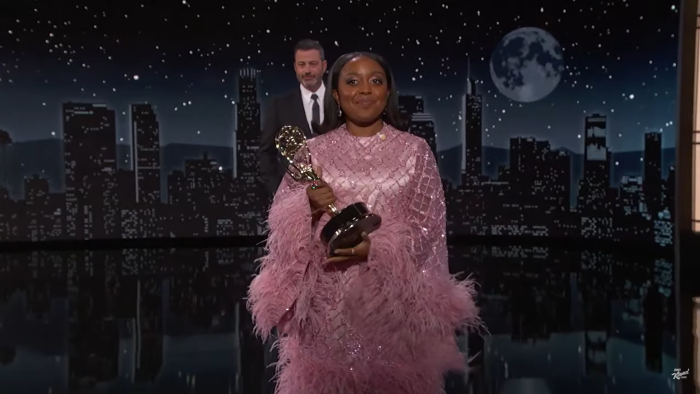 The Emmys took place this past Monday night. General feelings aside, everyone was thrilled that Quinta Brunson won her first Emmy. She received the award during her first appearance at the Emmys. It was for her work on Abbott Elementary, a show she created and stars in. It was an amazing moment, to say the least, one that many felt was spoiled by late-night host Jimmy Kimmel.

Kimmel was pretending to be drunk, as he had lost to John Oliver for the 30th year in a row, and stayed at Quinta’s feet for her entire acceptance speech. Well, Quinta made an appearance on Jimmy Kimmel: Live last night to continue to enjoy her moment. She shows up around the 11-minute mark in the video below.

One of the main things I love about her reappearance here is that it feels very sincere. Yes, Jimmy is still awkwardly standing behind her, and Quinta plays to the joke. It’s when she begins thanking people that the sincerity shines through. She’s a good sport, but she also just wanted her moment. A moment that she earned. She then got to introduce herself as Emmy Award Winner Quinta Brunson, and y’all, I got teary-eyed even writing that down.

She’s so happy and that got me right in the old feels.

Brunson returned after the break and received a public apology from Kimmel, who you could tell felt terrible. I’ve been there. When your whole purpose at an event is to make people laugh, you can end up with tunnel vision. I don’t believe Kimmel meant to diminish Quinta’s moment. But, hopefully, future hosts take a lesson from this mistake.

Quinta Brunson is a star, through and through. This will not be her last Emmy win, but it is certainly a memorable one.