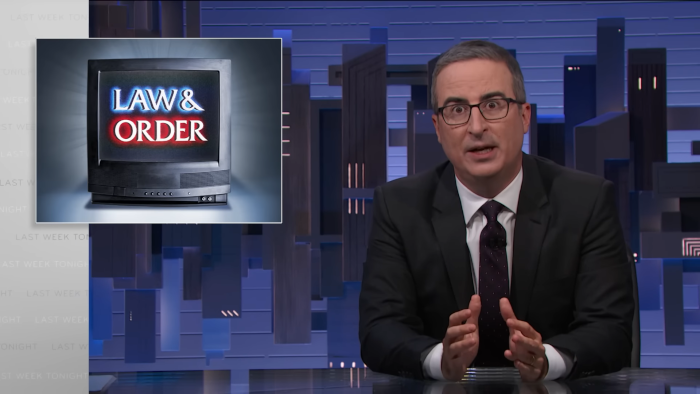 In my 33 years of life, the first time I saw an episode of Law & Order was about four or five months ago. In this case, it was the spinoff, SVU. I was tuning in strictly because two of my friends were going to be in it! I didn’t have a particular reason for never watching it before; I was just never interested (I’m still not). But, from the little I knew from the show, I naively assumed it would tackle things like the corruption, inherent racist practices, and overall bad behavior of police officers. According to John Oliver, I was dead wrong.

In the latest episode of Last Week Tonight, almost 24 hours before another LWT Emmy win, Oliver dove deep into the world of Dick Wolf, creator, and executive producer of the Law & Order franchise. In these shows, cops are tried and true warriors for truth and justice, who only rarely target minorities or commit crimes of their own. Anyone who has been paying even the slightest bit of attention should know that isn’t the case.

It’s not that the show should be required to portray the horrors of policing, but hearing lawyers say that they get their education from a fictional and skewed program is troubling, to say the least. Things become even more problematic when Oliver points out that the NYPD has consultants on the show to make sure they aren’t portrayed too negatively. The show benefits from this arrangement, as it makes it easier for them to film in the city with help of said cops.

I will continue to not watch Law & Order, and I don’t fault anyone who does. I just hope that people will be able to separate fact from fiction. That they will understand that the police onscreen do not represent most of the cops in real life. Did I mention that I’m naive?

← The Problem with the 2022 Emmy Winners | It's Coked-Out Margot Robbie vs. Drunk, Tap Dancing Brad Pitt in the Trailer for 'Babylon' →