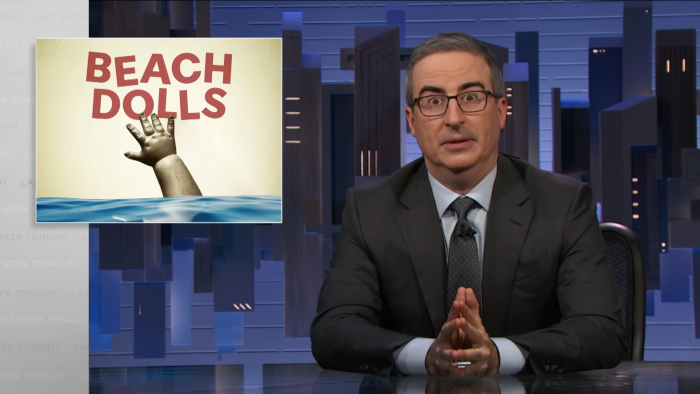 You thought it was safe to go back to the beach? What the hell is the matter with you? Let’s set aside the fact that beaches are full of people (gross). When you go there, it’s often hot and sticky. Next thing you know, you’ve got sand just about everywhere. By the time you leave the beach, you’re exhausted even though all you did was sit in the sun. While you were there, at best you got some reading done. It’s more likely that you walked away with a sunburn. It only makes sense that, along with all this other awfulness, beaches are also full of creepy baby dolls.

Brought to you by everybody’s favorite mood-ruiner John Oliver, this is yet another reason to avoid beaches. Usually, John is alerting us to various social, political, or environmental problems that deserve our attention. This time, he’s strictly here to give you neverending nightmares. His recent web-exclusive focused on 30 baby dolls washing up on beaches in Texas. Do I have to say anything else? Aside from the obvious, which is that beaches are bad enough, going to one in Texas feels like extra torture.

There has to be an answer to where these dolls came from, right? Wrong! These little demons appeared out of nowhere. Why should there be any rhyme or reason? Beaches are lands of utter chaos, fueled by dread and misery. They attract things like people who think it’s okay to blast music in shared spaces, sharp bones that are waiting to slice up your feet, and doll heads that seem to be smiling and screaming at the same time.

Enjoy your next trip to the beach! These dolls could have come from anywhere in the world. So, you don’t have to be in Texas to come face to face with monsters, but it sure does help!

← In Cancellations, Prime Video, HBO, and Showtime Pull the Plug on Three Series | 'Amsterdam' Trailer: What a Cast! But Ugh, What a Director! →