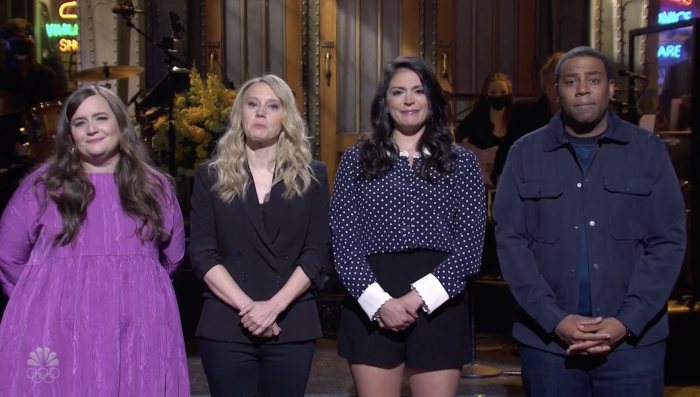 Longtime 'SNL' Veterans May Not Only Stay, But Remain For Several More Years

There was a lot of speculation at the end of last season that at least five long-time SNL cast members — Cecily Strong, Kate McKinnon, Pete Davidson, Aidy Bryant, and Kenan Thompson (and possibly Colin Jost) — might be leaving the show. Maybe not. Since the end of the season, the cast members who have been asked about their status have been noncommittal, saying that it’s still “up in the air.”

According to both Variety and Deadline, Lorne Michaels is about to begin negotiations with those cast members. According to their “sources” — whatever that means — Michaels is not only interested in bringing them back for another season, but potentially extending their stay for several more.

Why? Despite a deep roster of up-and-comers (Bowen Yang, Chloe Fineman, Ego Nwodim, and Heidi Gardner, chief among them), the show is eager to keep around the better-known talent because the show is currently making a killing for NBC, and Michaels doesn’t want to interrupt the mint.

But more importantly, SNL is coming up on its 50th season (which begins in 2024), and there’s talk that Michaels may want to keep those veterans around until then, not only so that the show will be fully stocked for the anniversary year, but because it could also be a send-off year for Michaels, who is currently 77 years old and JUST RETIRE ALREADY. Fifty years is a nice round number, isn’t it?

The wrinkle here, however, is that Michaels would allow for far more flexibility than he had until last season, when Cecily Strong, Aidy Bryant, Kenan Thompson, and Chris Redd were allowed time to work on other projects (Schmigadoon, Shrill, and Kenan, respectively). It’s a tight-knit cast, and Kenan has already stated that he’d like to stay for at least 20 seasons (he’s at 18). Many of the other veterans may be looking for an excuse to stick around that also allows them to pursue other opportunities (like, say, Colin Jost writing a Teenage Mutant Ninja Turtles movie with his brother).

I’m not against the idea, but I’m not exactly for it, either. The cast is a little overstuffed at the moment, and they’re already competing with celebrity cameos, which leaves less time for Bowen, Ego, and Heidi. Then again, if the veterans will be spending some time away, the newer cast members should still be afforded plenty of opportunities. On the other hand, “Update” should be revamped. Colin Jost and Michael Che have admittedly improved over the years (notwithstanding Che’s tendency to stick his foot in his mouth), but they’re already the longest-serving team in SNL history (and Jost is 3 episodes away from beating Seth Meyers for the longest-serving anchor). It’s time to shake things up.