When Being A Complete Turd Goes Right: Michael Che (Again) and DaBaby Edition

I am trying not to have this piece be a series of repeated exclamations of “f—k you”, “eat sh-t”, and “asshole”, and actually have something to say. But it’s really goddamn hard when you have two such perfect examples of f—knuttery before you.

Long-time Pajiba readers may be familiar with our general opinion on Michael Che, namely: his pathetic attempts at trolling anyone getting more attention than him often gets in the way of his broken-clock good points. Of course, that’s the most generous view.

Me personally? Some days, I think that Michael Che’s true job at SNL is to be such an exhausting asswipe of a human being that he makes Colin Jost (the literal wealthy Ivy League brat who, per his own book title, has a very punchable face) seem downright cool in comparison.

Case in point: The alleged “comedian” decided he absolutely needed to comment on anything related to Simone Biles. Of course, being the iconoclast and devilish rogue that he is (*snerk*), he decided the best way to do so was to reach out to his followers for inspiration..?

Shortly after he rightfully got dragged for his sh-t “jokes”, he later posted that he “got hacked”. Note: while most reporting says he deleted all his Instagram posts, he actually only posts to Stories, so there were no actual posts to delete. That might be because he is a grown-ass man fully aware of the sh-t he spews but ultimately doesn’t have the “thick skin” for criticism he demands from others? Who knows?

Now, I will be fair to Che: he didn’t actually post any of his Biles jokes (see aforementioned lack of thick skin). He just shared jokes other people sent him and cosigned on them. What’s fun to note here is that while he’s cracking wise, he didn’t bother to CENSOR OUT THE SCREENNAMES OF THE PEOPLE SENDING THEM. So congrats, douchenozzles. We now have screenshots of you making fun of sexual abuse and mental health all to impress Michael Che. Your families must be proud.

But you will have to forgive Che. He is probably still a bit hurt over being dragged for that absolutely embarrassing “Gen Z Hospital” skit and his subsequent claim that he never heard of the term AAVE before. So he obviously needed to find a target at which to point his ire. Of course, he comes for a visibly successful Black woman with a lot of attention currently pointed her way. She has to be taken down a peg for daring to care about her health and not wanting to risk getting paralyzed or ruining her team’s chances, right Che?

It’s one (still sh-tty) thing to crack a joke about her dropping out of competition. It’s another to broadcast a joke about the man convicted of sexually assaulting her and her friends/teammates and many others by saying their situations were in any way similar.

I wonder how he’s going to paint this on the second season of his HBO show. I’m sure it’s going to involve saying people are too sensitive or some other bullsh-t.

But since he mentioned DaBaby…

For those who missed it, rapper DaBaby, who is increasingly proving his peak achievement was getting the Jabbawockeez on SNL (another connection!), recently got into some “hot water” as they say.

During his set at the Rolling Live festival (I will come back to “why are y’all even having a damn concert” later), DaBaby decided that it was a good time for a PSA from the Ministry of Who Asked You A Gotdamn Thing About Sh-t.

And yes, the irony of handwringing about AIDS during a concert nobody should be having during a pandemic that isn’t even close to being over is not lost on me (see, told you I’d get back to it).

Right before this rant, during the same set, DaBaby invited Tory Lanez on stage as a surprise guest, directly after his former collaborator Megan Thee Stallion had performed (possibly violating the restraining order she has against Lanez for allegedly F-CKING SHOOTING HER), seemingly as part of a long-form troll job against her calling him out for supposedly supporting her in private while doing the very opposite in public.

After being dragged hither and thither for his nonsensical proclamation, DaBaby gave an apology weaker than grits in Maine (H\T Dustin!), while even more celebs, including Dua Lipa (who had him as a guest on her song and also got DaBaby’s apparently patented method of passive-aggressive liking social media posts insulting her), Madonna, Elton John, and more.

During the cavalcade of callouts, Questlove himself posted an absolutely blistering response (and even called himself out for not speaking out sooner on other similar issues). DaBaby tried to save face by claiming he didn’t know who Questlove is.

Who has played drums for DaBaby before.

Mr. I Don’t Know Who QuestLove Is pic.twitter.com/PniPLWMqe2

Everyone knows who Questlove is. Stop it.

Do you want to know how bad DaBaby f—ked up? The sheer magnitude of how out of pocket he was?

You know how bad you gotta be for Chris Brown to be giving you PR advice 😭 https://t.co/E9FW8U9gsB

(Let me throw in an extra “f—k you” for making me agree with THIS clown.)

Did you think any of this got DaBaby to think twice for even a second? No, no it didn’t. In the new video for his song “Giving What It’s Supposed To Give,” DaBaby not only left in another damn punchline about AIDS (while the video depicts him literally holding up a sign that says “AIDS”), but had the balls to have this at the end…

I don’t know how to describe it. It’s a masterclass in responding to criticism and controversy in the most fuckboy way possible. 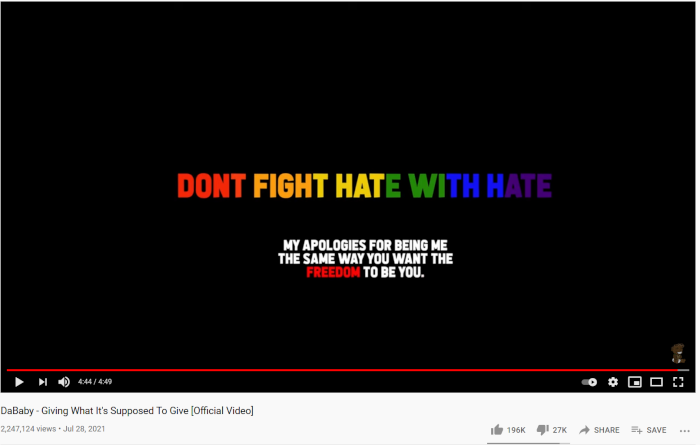 (Don’t worry, I used incognito mode, then cleared my cache, and currently running a “rampant ignorant sh-t” scan on my machine)

I may be wrong, but it seems like DaBaby is saying that his “right” to use AIDS and gay people as a punchline should be treated the same as the right for LGBTQ+ people to basically exist in society. And he used the rainbow coloring on his font too. Because expressing homophobia is just the flip side to gay people wanting to live their lives, you know? His overbearing concern about people having sex he doesn’t approve of and maybe having AIDS is as intrinsic to him as a person’s sexuality (which he still gets to judge). He’s just being him, y’all! Live and let live (unless you have AIDS)!

And that’s really the unifying thread between these two sh-thickeys: a willingness to throw successful Black women and LGBTQ people under the bus for attention from the same crowd of foolish ass cishet men (and their pickmes). By simply existing in their totality in a country that has shown in myriad ways how much it hates them, these marginalized folks prove they are simply more transgressive (and successful) than either of these psychological biohazards dream to be.

And you can even see them starting up the usual comeback for social terrorists like these. How they won’t just go “yes I’m an asshole and I’m never changing.” They need to be considered a hero for it. They need to hear that everyone agrees and they are in the right. Che, DaBaby, even the likes of certain authors who thought transphobia was a fun hobby to get into. The same damn playbook of “I’m right, I’m the hero, I’m the victim of the mob” when people rightfully point out that they are targeting groups they have immense levels of privilege (yes that word) over.

To both these canker sores, and the sycophants who cosign and prop up every insensate utterance they spew, I say:

F—k you and eat sh-t, you absolute and total assholes.


← The COVID-19 Crisis is a Taste of the Climate Crisis | With 'Jungle Cruise', Disney Continues to Stumble with its Paltry LGBTQ+ Representation →