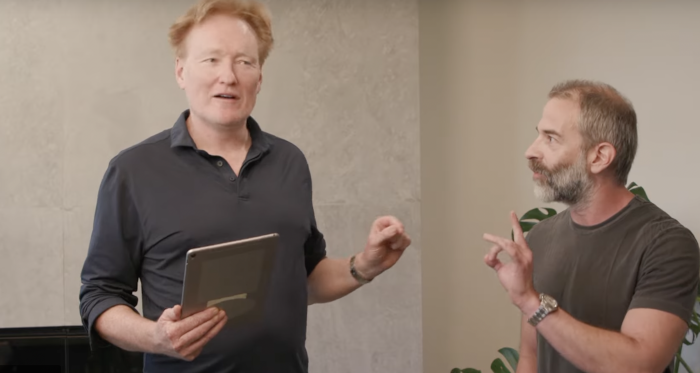 Conan O’Brien has a contentious relationship with any employee he appears with onscreen. He plays the role of both boss and tormentor, but for fun. It’s part of his smarmy charm. Whether he’s getting on his assistant Sona Movsesian for not doing her job or questioning why Matt Gourley works on his podcast at all, Conan knows how to playfully get under the skin of his employees. But there is one person in particular who feels Conan’s wrath the most: Jordan Schlansky.

Schlansky is an Associate Producer who works for Conan, and their feud is legendary. For years Conan has given Schlansky a hard time for, ya know, being himself. He’s a quiet, smart, measured human being (at least on camera) who Conan often compares to a robot. They traveled to Italy together just so Jordan could show Conan around while Conan berated him for his knowledge. Usually, Schlansky takes it on the chin, but recently he hit a breaking point.

Conan filmed a segment with Schlansky to talk about the Producer’s new gig on Cameo. (It looked surprisingly similar to a video they put out in August, so they’ve been sitting on this gold for months.) It’s full of what you’d expect, like Conan pontificating as to why anyone would pay Jordan for a video. But it quickly takes a turn when Jordan starts laying into Conan for not starting his new show yet. When O’Brien retired from his late-night show, it was with the promise that he would return with a type of variety show. Well, that show hasn’t materialized yet, and Jordan is salty about it.

It’s safe to assume that this was all in good fun and as Conan points out, he is still paying Schlansky to wait. Albeit with a reduced salary. Still, there’s something to be said for how caught off-guard Conan seems when Schlansky brings up the non-existent show. Conan doesn’t break often, but he can’t hold in the laughter when Schlansky starts yelling at him. It’s incredible.

Like Jordan, I have also been waiting for Conan’s new show, so I get it. On the plus side, it can now be said with some certainty that Jordan should have a weekly segment on whatever that show ends up being.