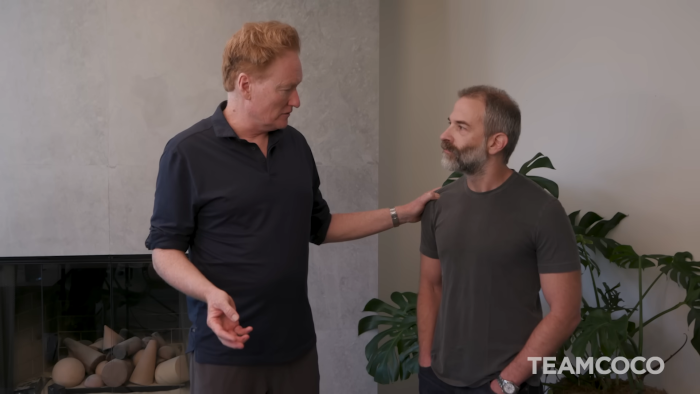 Conan Has A Passionate Reunion With His Least Favorite Employee

Beauty and The Beast. King Kong and Ann Darrow. Andrew Sanford (that’s me) and a fresh box of Cheez-its. Love stories where an uncontrollable beast eventually convinces the one they love to submit are as old as time! Recently one such pairing reunited, and sparks flew. I am talking about Conan O’Brien and one of his Producers, Jordan Schlansky.

If you are not familiar with Conan and Jordan’s relationship, it goes like this. Jordan is an interesting (albeit intense) guy, and Conan loves to make fun of him for it on camera. I can understand how some people could find this type of stuff unpalatable. To me, it feels like a joke that everyone involved is in on and has signed off on.

Since Conan’s show ended, there hasn’t been much Jordan aside from a brief appearance at a live show. Seeing him back, filming a segment with Conan again, made me grin the second I saw it. These two have a chemistry that is built firmly upon their lack of chemistry. Jordan is the ultimate straight man. His responses will remain muted, even when Conan has clearly said something that tickles him. While Conan seems to get bigger and wilder the longer he’s in a room with Jordan. It’s perfect.

Here, not only do you get Conan ragging on Jordan, you get to see Jordan fight back! At one point, he’s going after Conan so hard that the former late-night host almost tackles him to the ground. Conan has said before that he likes to get physical when he’s joking around, and you can see him slip into that habit in a way that still feels loving and fun. It’s weird, but it works.

← Podjiba Returns With 'Westworld,' 'The Rehearsal,' And Of Course Tori's Water Talk! | Matthew Fox Is Back. For Some Reason →