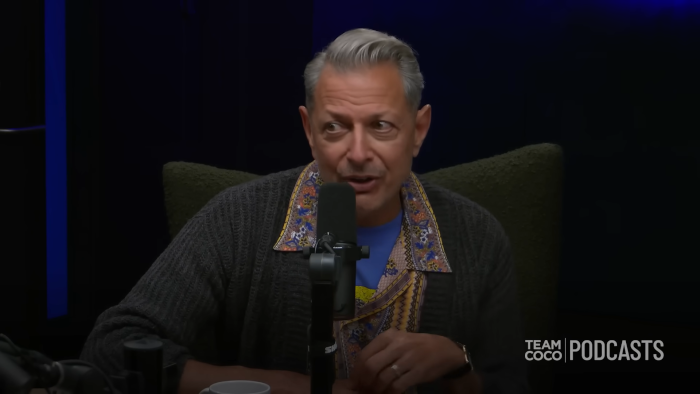 Conan O’Brien Needs A Friend does not feature many recurring guests. It certainly happens. Hilarious people like Tig Notaro and John Mulaney have both hopped in Conan’s booth on several occasions. The reason for their repeats is clear almost immediately. They share undeniable chemistry with the eponymous host. There is another guest, however, who feels like he should be a permanent fixture on the program. He is also a huge fan.

That person is none other than Jeff Goldblum. I know it’s not a big reveal, he’s in the title and header. This just felt like a good way to break things up!

Goldblum has appeared on the podcast twice, and this time he let his fandom emerge. He went out of his way to praise Conan’s partners in crime, Sona Movsessian and Matt Gourley. But he also went out of his way to mention longtime Associate Producer and thorn in Conan’s side, Jordan Schlansky. Jeff (we’re friends) claims to have watched all of Conan’s available clips, and he likes Schlansky’s appearances the most.

He’s not wrong to praise Schlansky! Watching Jordan get under Conan’s skin and vice versa is a true delight. They are an incredible comedy duo that often blurs the line between what is schtick and what is real. Much like Goldblum himself. Now, all we need is to get Schlansky and Goldblum in the same room. I don’t even care what the context is! Just make it happen!