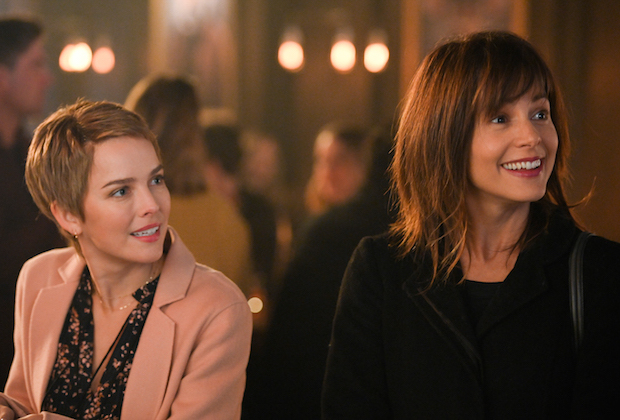 There are only two episodes of A Million Little Things remaining in its second season, and next week’s episode is John-centered (Ron Livingston will return), so storylines are wrapping up here as the series heads toward a hiatus before what will hopefully be a season 3.

One of the bigger storylines this season — or the one fans are most interested in — is the romance between Gary and Maggie, who broke up earlier in the season but clearly still have feelings for one another. In this week’s episode, Gary flirted with a single mother, Darcy, while hanging out with Theo at a laser tag park, setting up a potential (though likely brief) romance there. Elsewhere, Maggie and Delilah decide to go to a happy hour, where they get plastered while a guy played by Parker Young (who looks like Tim Tebow) makes eyes at them. The assumption is that he’s into the younger Maggie, but we soon learn that he’s into Delilah, who is too drunk to say “peek-a-boo.”

While Delilah and Miles (the guy played by Parker Young from Suburgatory) canoodle, Maggie gets a call from England, where she learns that she has been offered a slot in the fellowship program that rejected her earlier this season. Being a little tipsy, Maggie immediately accepts.

Is Maggie (Alison Miller) leaving the show? It seems very unlikely. There’s no indication of it. In all likelihood, it’s setting up a season finale in which Gary is compelled to admit how he feels before Maggie leaves and/or he ends up going to England with her (followed by a six-month time jump between seasons). It could also set up a “Will she go to England?” cliffhanger.

Meanwhile, Eddie’s sister, Lindsay (Sprague Grayden) — also an addict — came in for a visit and Eddie was wary of having her around Theo. When Eddie found cocaine in the guest room that he thought belonged to Lindsay, he kicked her out. He later learned that the cocaine belonged to the musician he was producing and he had to eat his words and apologize to his sister, who quickly forgave him. At the same time, Katherine finally quit her job after her bosses crossed the uncrossable line: They refused to stand up for Carter (Sam Pancake). So, now Katherine is unemployed, and Eddie the recovering addict will have to work with a coke fiend to support his family.

Finally, Rome and Regina’s adoption plans hit a snag when Derek, the abusive father of the baby showed up. Eve, fearing for the safety of the baby, played along with Derek’s plans to go back to Philly until Rome and Regina could trick Derek into signing away his parental rights, at which point they hid Eve away from Derek. Game over, Derek.

Next week, Ron Livingstone returns, and the family has to reckon with John’s death on the year anniversary.