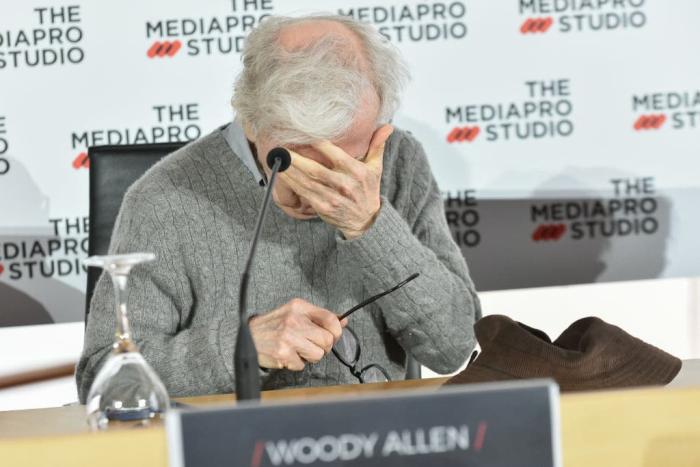 #LittleBrownWalkout UPDATE: Hachette Announce That They Will No Longer Publish Woody Allen's Memoir

After it was revealed that Hachette, an imprint of the publisher Little, Brown, had acquired the rights to Woody Allen’s memoir, one of the company’s more high-profile clients, Ronan Farrow, decided to cut ties in protest. This was only the start of the pushback, as yesterday saw employees of Hachette Book Group stage a walk-out. They were followed by their colleagues in other imprints, including Grand Central, Forever, Orbit, and Basic. Twitter was kept abreast of the action via the hashtag #LittleBrownWalkout.

The #littlebrownwalkout marks a real and important shift in publishing. The next generations will not stand for this utter lack of integrity. Proud too of Grand Central employees who are adamantly against this book deal. pic.twitter.com/luB3iSULPw

As an employee of Hachette Book Group and in support of my colleagues at Little, Brown and survivors of sexual assault, I am walking out of the New York office this afternoon. #LittleBrownWalkout, #GrandCentralWalkout, @RealDylanFarrow, @RonanFarrow

Feeling emosh for friends and colleagues at Hachette! We should’ve done this at S&S when the Milo Yiannopoulos deal was announced a few years ago. It’s easy to take a stand in your group chat, harder to actually walk out and show you mean it. Love to #littlebrownwalkout! https://t.co/LBeySL8vpt

It was terrifying to walk out, but I stand in solidarity with everyone against the Woody Allen memoir. So proud to stand among everyone here. #LittleBrownWalkout #GrandCentralWalkout

It’s always a risk for employees of any field to stage a walkout in this manner, but especially in one as high-profile as this. This protest has highlighted a major problem that publishing has avoided facing head-on for a long time now: The responsibility they have when it comes to the widespread misinformation, lies, and outright attacks perpetrated by authors they are supporting. This is more evident in the right-wing imprints of various publishers who churn out books by bigots and bullies without any sort of fact-checking. Ronan Farrow pleaded with the publisher in his own statement to stridently fact-check Allen’s memoir, but that sadly almost never happens in non-fiction publishing. Yes, that is a big problem.

Publishers can claim all they want that the various imprints never interfere with one another, as Hachette CEO Michael Pietsch tried to claim in his statement, but we all know that they do. None of this happens in a bubble either. Publishers putting profits behind people and ethics has helped to further poison the well. Hachette and Little, Brown got amazing publicity and profits from Ronan Farrow’s book and the buzz of being on ‘the right side of #MeToo’, then they decided to invest in Allen. At the very least, it’s a skeezy choice. At worst, it’s downright exploitative.

In a statement given to The Hollywood Reporter, Hachette Book Group said, ‘We respect and understand the perspective of our employees who have decided to express their concern over the publication of this book. We will engage our staff in a fuller discussion about this at the earliest opportunity.’ Uh-huh, sure you will. That’s some big ‘I’m sorry if you were offended’ energy right there.

Solidarity with the protestors. Read books not written by accused child rapists. There are some great ones out there, I promise!

UPDATE: Hachette announced this evening that it will no longer publish Allen’s memoir. In a statement, the publisher said ‘the decision to cancel Mr. Allen’s memoir was a difficult one. At HBG we take our relationships with authors very seriously, and do not cancel books lightly.’

JUST IN: Hachette will no longer publish Woody Allen's memoir, calling the decision "a difficult one." The move follows a staff walkout yesterday. pic.twitter.com/GtbcxC92Uv

It’s a pretty mealy-mouthed statement, I must say. This was never a freeze peach issue or one of ‘hearing all sides’ but a question of how the power dynamics of celebrity allow for an uneven balance of the conversation. How can you claim this is about ‘different voices and conflicting points of view’ when the big worry is in letting an accused child abuser get free rein to potentially smear a victim and her family, all without a smidgen of fact-checking?

A massive thank you to the Hachette employees who protested and organized. Power to the workers, right?!