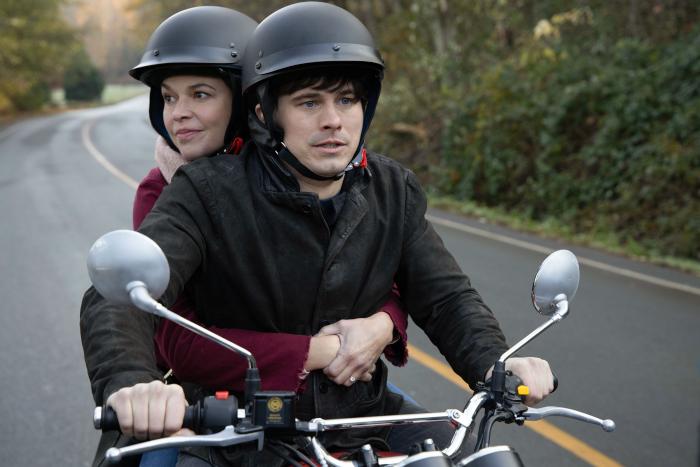 Eric is a Grief Eater On 'A Million Little Things'

Previously on A Million Little Things, Eric (Jason Ritter) connected with Patricia after claiming to be the transplant recipient of her son Chad. Patricia basically left her husband so she could spend time with a man claiming to have her son’s heart. Eric then preceded to bond with Maggie, Chad’s sister, by — again — holding himself out to be the recipient of her dead brother’s heart. A few weeks ago, however, we discovered that Eric did not have a scar on his chest, precluding the possibility that he was the recipient of Chad’s heart. This week, we found out the real story, and it’s a doozy.

Chad died on the same day that Eric and his fiancé, Chloe (Sutton Foster), suffered a motorcycle accident. Both Chloe and Chad were admitted to the same hospital. When Chad died, Chloe received his heart. The worst day of Maggie’s life thus became the best day of Eric’s. However, six years later, Chloe died. At the same time, Chloe — as the actual recipient of Chad’s heart — received a letter from Patricia. Eric read the letter and empathized with her grief over losing her son so much that he decided to reach out to Patricia, where he found out that Maggie was also trying to survive cancer. Eric apparently fed off their grief, and after explaining this to Maggie, he told her that he loved her. Maggie, rightfully, dismissed him, and Eric walked away, likely (hopefully) for the last time (notwithstanding my immense affection for Jason Ritter).

And that’s the story. Eric’s a grief eater. Gross.

Meanwhile, Gary — who has been a sullen, assy pill since he broke up with Maggie — finally decided to meet his mother, who abandoned him as a child. Gary confronted his mother — played by Marcia Gay Harden — who told him that she thought he would be better off without her. She then asked Gary if she could have another chance at being his mother, and asked him to dinner that night. However, when Gary arrived for dinner, an opportunity for career advancement fell into the lap of Gary’s mom, who blew off Gary to go have dinner with the person offering the other opportunity. While it should have been upsetting for Gary, it was actually the opposite. He finally realized it wasn’t his fault that his mother left; she was just that kind of person.

Rome discovered that a friend of his (played by Jerry Ferrara, Turtle from Entourage) had stolen from him a screenplay based on Rome’s life and was trying to sell it. However, Rome met with Turtle’s investor and told him the truth, and the investor decided that he wanted to make the movie with Rome. Regina, meanwhile, spent the day with her mother after telling her that she and Rome were going to adopt. They worked through some issues.

Eddie, Delilah, and Katherine mostly sat this episode out. Interestingly, however, the episode was stacked with great guest stars who had minimal screentime (Marcia Gay Harden, Sutton Foster, and Jerry Ferrara), and it is unlikely we will see any of the three again anytime soon (particularly Sutton Foster’s character, who is dead and seen in only flashbacks).

The promo for next week’s episode suggests it will center entirely on Delilah and her daughter, who is dating an older kid, but the episode description also mentions that Maggie and Gary will face “a harsh reality when they attend a mutual friend’s cancer remission party,” so we’ll see how much longer they can drag out this will they/won’t they storyline.