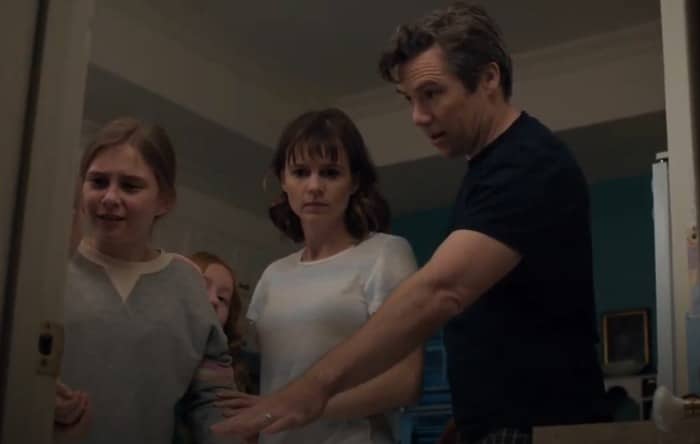 Is Andy Bouchard of 'Evil' a Secret Demon?

The Paramount+ series Evil has no shortage of demonic events or characters to choose from, Michael Emerson’s Leland Townsend being the most obvious among them, but plenty of the weekly characters or mysteries have also been rather floridly devilish in nature. We haven’t seen a lot of George, Kristen’s night-terror demon in a while, but Ben got his own demon for a bit. And I have no idea what’s going on with Sheryl this season (seriously, not even a little bit) but I don’t think anyone who talks to a creepy doll and burns money as offerings for it is on the side of the angels. However, could there be another, much more subtle demon lurking around? Could Andy Bouchard also be a demon? Or is he just a supernaturally dim husband?

For those of you wondering who I’m talking about, it might be because this allegedly devoted husband and father of four (FOUR!) daughters regularly spends months away from his family running a climbing business that is based in Colorado while his family lives in New York. (Side note: Why didn’t the family relocate to Colorado? Kristen’s job as a forensic psychologist seems pretty flexible location-wise. They have a police department in Denver, I’m sure of it.) We’ve heard that Kristen was actually the better climber but gave it up to settle down and take care of her family, you know, like any responsible adult would. Andy, however, just blithely traipses off to engage in an incredibly dangerous job thousands of miles away from his rapidly growing daughters and wife, who are living in a two-bed, one-bath townhouse.

Perhaps this does not strike you as demonic so much as boneheaded, and that’s what I thought at first too until I remembered C.S Lewis’s The Screwtape Letters. Basically, the temptation to sin can come in a big, shiny package marked “TEMPTATION!” or it can come in small, everyday annoyances or grievances that drive one further and further from the path of righteousness. In this case, an absentee husband who let his wife abandon her dream career while he kept on with it, giving her lots and lots of time to spend in the presence of an exceptionally attractive ALMOST priest. Andy’s absence also probably contributed to Kristen’s feelings of isolation and conviction that she had to neutralize the LeRoux threat on her own, and brought Sheryl back into the girls’ lives. Sheryl is absolutely nowhere near the path of righteousness, that much I am sure of.

Evil, as a show, does not seem like the type to go subtle so it’s not likely Andy is a demon. It is entirely believable that a normal, human man is just that self-centered and emotionally dense. And, let’s be honest, one does not need a demonic push to have wildly sinful thoughts about anyone who looks like Mike Colter. But it would be a fascinating exploration of the variations of temptation, and how it can come at you in a form you’d never suspect.