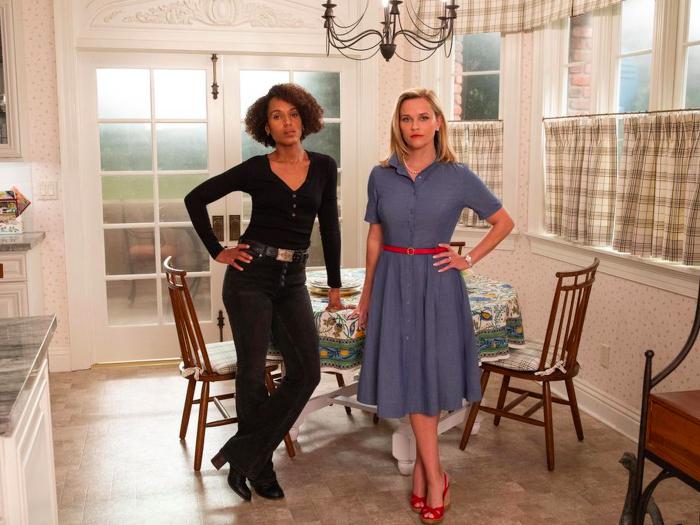 Going into 2020, maybe the show I was most excited about was Hulu’s Little Fires Everwhere, based on a Celeste Ng novel, a book so good that reading it instantly made her one of my favorite authors. Meanwhile, the production could not have found a better roster of talent in Reese Witherspoon and Kerry Washington, who seemed perfectly cast in the roles of Elena Richardson and Mia Warren, respectively, and a director in Lynn Shelton who has, for years, directed great relationship comedies (Laggies, Your Sister’s Sister) and a lot of great television. Not only did Shelton — who directs half the episodes — bring along her indie-flick muse, Rosemarie DeWitt, but she also rejoins creator Liz Tigelaar, a writer and exec producer on another excellent Hulu series, Casual.

The problem with Little Fires Everywhere, however, is that Ng’s low-key literary family drama is overpowered by the showy performances of Witherspoon and Washington, and the writing considerably ratchets up the melodrama at the expense of its themes. Ng’s novel is perfection, and while there have been a few changes in the adaptation, the differences are largely a matter of the mix. The best parts of the book have been muted, while the Hulu series amps up the dramatic confrontations at the expense of everything else. The book explores the quiet insidiousness of white privilege, while the series is about Witherspoon’s SUPER RACIST WHITE LADY and Washington’s character, WHO DEFINITELY IS NOT THE MAID.

Part of the problem in adapting Little Fires Everywhere onto the screen is that the book has a keen sense of place — it’s set in the ’90s, and it feels like it is set in the ’90s, so the conversations that are being had about race and privilege feel appropriate to the era. The series, on the other hand, is not well-grounded and it often feels like archaic ’90s conversations about race and class are taking place in the present. It’s not that the issues don’t still exist, it’s just that we talk about them differently now, while the language of the series is as though it is approaching the idea of white privilege for the very first time. You mean it’s not OK for a wealthy white teenager to pass off the experiences of her poor black friend as her own in a college application essay? What? Noooo!

Mostly, however, Little Fires Everywhere suffers from the performances of its two leads, who seem more determined to win awards than tell a story. Reese Witherspoon’s character is the over-the-top villainous version of her Big Little Lies character, while Kerry Washington wears a perpetual scowl while standing at a distance from both the characters onscreen as well as at a remove from the viewers — her daughter, Pearl (Lexi Underwood) is a better, more well-rounded character, and Underwood’s performance is likewise more vulnerable and open. The only actor who actually appears to have read the book, however, is Joshua Jackson, who plays a husband and father who at least recognizes his privilege, and while he’s not quite sure what to do with it, he knows enough not to wield it as a weapon. He’s also smart enough to realize that his wife is a terrible human being.

All of which is to say that Little Fires Everwhere is not a great series; it’s also a pale shadow of the source material. However, it is never boring. The performances are not nuanced, but they are entertaining. It’s just that Little Fires Everwhere feels less like an adaptation of Celeste Ng’s celebrated novel, and more like Bravo’s Real Housewives of Shaker Heights. That might have been the point all along.

← Review: 'Endings, Beginnings' is an Irritatingly Narrow View of Womanhood | Imagine Being A Photographer In A Digital World →