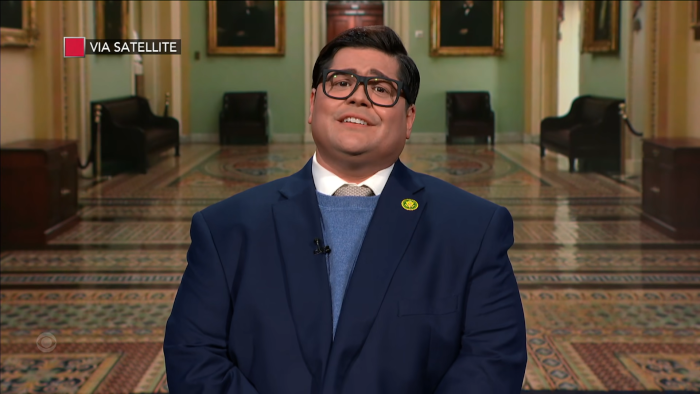 George Santos is a liar who does not care that he keeps lying. You are likely tired of hearing that. We here at Pajiba certainly are. However, every now and then a story gets a shot in the arm. Something or someone comes along who is so undeniable they breathe new life into the tale and something you could no longer stand to hear or see becomes all you want to talk about. To put it colloquially, Harvey Guillen has entered the chat.

The What We Do In The Shadows star dropped by The Late Show with Stephen Colbert not as himself but as George Santos (which Dustin totally called, by the way). He answered questions with the same amount of accuracy we would expect from the controversial Congressman. He lied and lied and lied. You may think that this joke has been beaten into the ground, but Guillen will drag you back in!

I have reached the point with Santos where I only want an update if he is in cuffs or resigning or both. He has moved from embarrassing to shameful and from shameful to downright despicable. He does not deserve the position he has. He doesn’t even deserve to be impersonated by someone as amazing as Harvey Guillen! You know he’s just as happy about it as we are. At the very least I can take solace in the fact that his reputation will be forever tarnished, and people will remember Harvey Guillen long after they forget about George Santos.