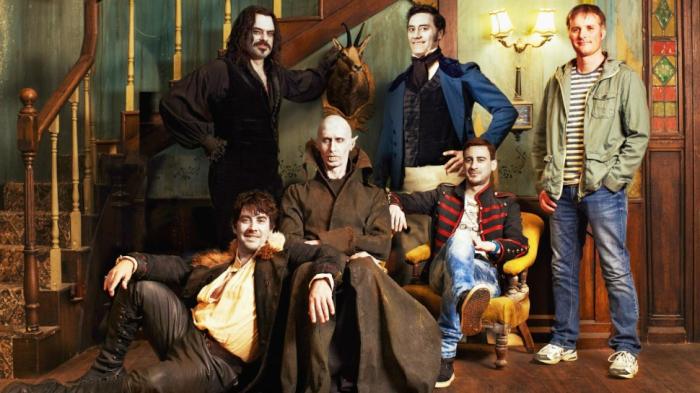 Before it was an 10-time Emmy-nominated TV mockumentary series, What We Do In The Shadows was a critically heralded film that reteamed Flight of the Conchords star Jemaine Clement with rising director Taika Waititi. And before that, the concept—a nest of comically eccentric vampires awkwardly rooming together in the modern world while a bewildered doc team records—was tested out in a short film, called “What We Do in the Shadows: Interviews with Some Vampires.” And if you ever wondered why Clement’s Flight of the Conchords co-star/bandmate Bret McKenzie has not been in these bloodsucker romps, the answer is: he almost was!

On Twitter, Clement was fielding questions and curiosities from fans. One pondered if Flight of the Conchords, What We Do In The Shadows, and the spinoff Kiwi sitcom Wellington Paranormal all exist in the same universe.

If so, and seeing as it's the same universe as Shadows, Vladislav would be able to bite Jemaine and there would be two vampires that look like me. That's too many. https://t.co/0dSFpbgNd0

That led to another fan imagining how Bret (the character from Flight of the Conchords, not the actual McKenzie) might behave as a vampire. Clement’s response unexpectedly revealed that McKenzie had played a vampire in the original short. Plus, why he was cut out!

Incidentally, that is also the reason he couldn't stop laughing.

Don’t fret for McKenzie. He’s not crying. (It’s just raining. On his face.) All kidding aside, there’s no bad blood between the Conchords, as the short was shot in 2005, years before their HBO series that led to thriving careers for both, boasting many Disney movies, Muppet shenanigans, Emmy noms, and even an Oscar win!

Now, if all this has you thirsting for the original short film, you can check it out below. For bonus fun times, imagine Bret offscreen, giggling over his own name while wearing fangs and a cape.