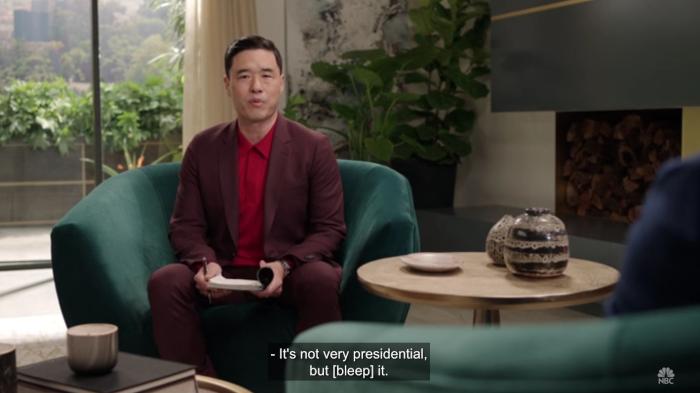 This Week On Podjiba: 'Young Rock' And 'Kenan' Premiere, Plus 'SNL' And 'WandaVision'!

Real talk: we haven’t played a game on the podcast in a while.

Part of this stems from our relatively late (on the east coast) start to recording, which means we’re always running up against bedtimes by the time we get to the end of the show. Part of this stems from the fact that more and more, we’ve found ourselves using up more of our recording time catching up (unrecorded), because… well, *waves arms around at the past year*.

But statistically, it seems as though you, our loyal listeners… maybe don’t have a problem with that? It makes me wonder if the game should quietly disappear, or if it just means we haven’t played a really good game in a while (which stems mostly from me not spending the requisite amount of time thinking about what game we should play).

In any event, this week’s show is no different! In that it is game-free, and also was recorded late into the evening.

What is in this show, however, are such exciting topics like…

- Another installment of Dustin’s Riverdale Recaps!

- Because it was so weird, we break our rule about not being a movie podcast to briefly discuss Dustin’s recent brush with the Mandela Effect when watching You’ve Got Mail!

- We discuss the premiere episodes of the new NBC sitcoms Young Rock and Kenan! (If, for some reason, you’re not in a position to listen to this week’s episode, blink twice and we’ll send a team to rescue you, but also, just know that we enjoyed both shows, but Kenan feels like it might have the higher ceiling once they figure it out!)

- We look back at this past week’s excellent episode of Saturday Night Live!

- Finally, our weekly look at WandaVision rounds out the show!

Hey, Podjiba is now on Pandora! It only took like 10 months to be approved. Also, Pandora has podcasts! Pandora. But we’re also everywhere else (I think?) as well as below, and right here.

← Twitter Reacts To Spider-Man Title Reveals: Phone Home, Home Slice, And Home-Wrecker | Why Jemaine Clement And Taika Waititi Cut Bret McKenzie Out Of 'What We Do In The Shadows' →