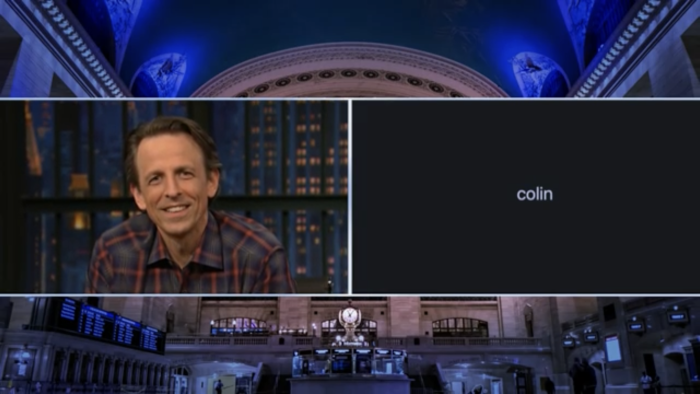 Some of the best late night interviews happen when the guest and host actually want to talk to each other. That may seem like an incredibly low bar, but in the business of show, people have things to promote, they go on talk shows, and sometimes it’s just that. Other times, actual friends and colleagues get to talk and then they bring friends and it all feels more effortless and fun. That’s what we got yesterday on Late Night with Seth Meyers.

Meyers had SNL writer and Weekend Update anchor Colin Jost on his show. It started out as fun, thanks to both men being friends. There’s an easy, breezy back and forth between them. Then things got downright silly when Meyers told Jost that Andy Samberg was attempting to text him. From there, things got absolutely silly.

Samberg was apparently texting Jost to tell him to not have text alerts on, that he was on peyote and then he attempted to solicit a d*** pic? It was absolutely ridiculous and kept the fun of the whole interview going. Soon it became more like a fun hangout than a run-of-the-mill late-night interview. And that tone stayed all the way until the end when Meyers jokingly refused to promote Jost’s new movie, Tom and Jerry.

Every late-night interview can’t be like this, of course. That’s why it’s important to revel in moments like these. To enjoy these real, human interactions that are about connecting with old friends and not just about promos. Because celebrities are just like us! For instance, I also went to college with Pete Buttigieg.


← Why Jemaine Clement And Taika Waititi Cut Bret McKenzie Out Of 'What We Do In The Shadows' | Watch the Trailer for Hulu's 'Kid90,' Soleil Moon Frye's Doc on '90s Child Actors →