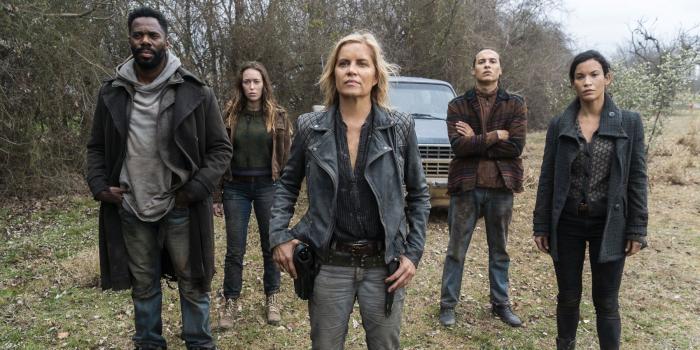 A Faltering 'Fear the Walking Dead' Is Bringing Back a Long-Dead, Original Character

I feel like I spend a lot of my time these days ragging on the The Walking Dead universe, but honestly, it’s bad. It’s real bad. With 16 episodes remaining in its interminable final season, The Walking Dead itself is going through the motions and throwing out cheap, pointless cliffhangers. Meanwhile, the second spin-off, The World Beyond, permanently ended its run last night. While the finale (and the series itself) has been a complete waste of time, it did at least provide us with a potentially interesting post-credits sequence setting up something, either a new spin-off series or the Rick Grimes’ movie, which will apparently feature strong, fast zombies who cannot be killed with a simple shot to the head (I would like to reiterate that the post-credits sequence had nothing — zero — to do with the rest of The World Beyond, which proved to be a completely unnecessary series).

And then there’s Fear the Walking Dead, the original spin-off series that is quietly now in its 7th season. Seven seasons! It was announced after last night’s midseason finale that it has been picked up for an 8th season, and here’s the kicker: Kim Dickens is returning.
Wow.
Kim Dickens played Madison Clark, who was the star of the series — the Rick Grimes, so to speak — for the series’ first four seasons. And then she died. And no, we did not see her body, but it also didn’t leave a lot of ambiguity. She sacrificed herself to save her people.

In fact, as it turns out, Kim Dickens did not want to leave Fear at the time. She said herself that she was “heartbroken” and “devastated” when she was written out of the series. She loved the role. Interestingly enough, fans were annoyed and over Madison Clark until she was killed off, and they have been clamoring for her return ever since. Fear has been happy to misleadingly stoke those fires on occasion. Except that now they’re actually going to bring her back.

“If there were a Mt. Deadmore, Kim Dickens’ face would be on it. Madison Clark is a foundational character to TWDU — heroic, complex, an everyperson who becomes a warrior and then a force of benevolence,” said Scott M. Gimple. “Kim Dickens’ raw talent, strength, and brilliance will electrify TWDU once more and we couldn’t be luckier to have her back.”

Dickens will return in the back half of season 7, which itself won’t return until April 17th (AMC aired the midseason finale last night). She will become a series regular in season 8. The cast itself has turned over almost entirely since Dickens left, and it’s possible there’s more turnover in the making. Two of the three surviving characters from the first season are possibly on their way out. Colman Domingo’s Strand has gone full villain this season, while (spoilers) Alycia Debnam-Carey’s Alicia Clark (Madison’s daughter) has been bitten in the arm, but has been riding out a zombie infection for months. Alicia insists that she will eventually succumb to it, but that’s not entirely clear. She removed her arm, but it was too late; the infection had spread. Nevertheless, she became the first character in the history of the TWD universe to survive a zombie infection as long as she has. It’s unclear what Fear has in store, but since The World Beyond introduced the idea of different zombie variants, perhaps the zombie virus has mutated to become less lethal?

It’s worth noting, too, that the midseason finale of Fear also introduced another new idea into the universe: The possibility that zombies have residual memory. Alicia is in search of a community called PADRE, and the only person who knows where to find it is dead, so she has decided to follow the zombified version of that person in the hopes that the zombie will lead her to PADRE. This season has been kind of a mess, one where Alicia — the nominal lead of the series — didn’t even appear until the 7th episode of the season.

In any respect, I’m not keen on Fear at the moment, but I do love Kim Dickens, so I am nevertheless excited that she’s going to return. It’ll be interesting to see if showrunners Andrew Chambliss and Ian Goldberg adopt the idea of Fear’s original showrunner, Scott Erickson, and turn her into a villain in the final season of the series.

I hope they paid her well, not only because she’s worth it, but because they screwed her over three seasons ago.


← Is Sylvester Stallone a QAnon Believer? Sure Looks Like It | John Oliver Explores The Surprisingly Rich History Of Snack Based Video Games →