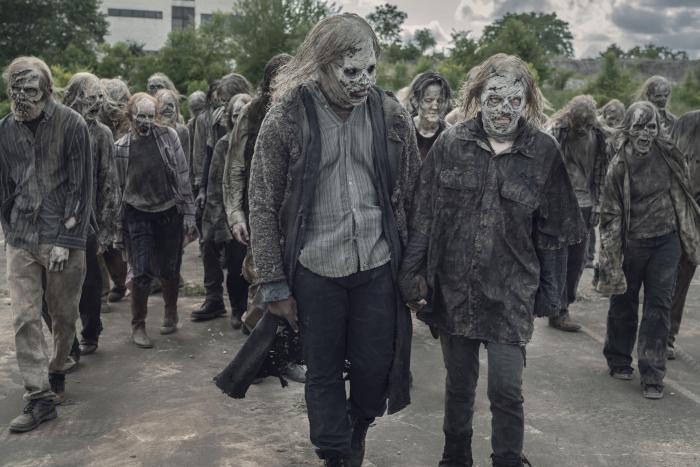 The Walking Dead is now in its eleventh season. Eleven seasons. The audience isn’t nearly what it once was, but practically no one who is still watching in its eleventh season has any plans to quit. We are 161 episodes into it. What would be the point of quitting now? With only 16 more episodes remaining? We may not enjoy The Walking Dead anymore (especially after these last 8 episodes), but we didn’t come this far to quit this close to the end.

You know what you do not need when you have a committed but frustrated audience? A goddamn cliffhanger. Honestly, what is the point?! There’s a calculation that goes into cliffhangers, one that balances the need to lure an audience back after a long break and the frustration a cliffhanger inevitably involves. The winter finale — the last episode until February — did not need to lure an audience back. Again, we’re committed, whether we like it or not. The only thing a cliffhanger at this point in The Walking Dead does is leave us frustrated. Pissed off is more like it. The only thing the first eight episodes of this season had going for it was the hope of some payoff in the winter finale, a sincere wish that the ass-dragging Reapers storyline would close out so that the series could turn toward the more interesting Commonwealth storyline.

The Commonwealth storyline did not appear in the finale, and when the series returns in February, it still has to deal with The Reapers, despite what we all know: It’s filler. It’s a way to pad out the season that otherwise will be driven by The Commonwealth. The Reapers exist only to give half the cast something to do before they relocate to The Commonwealth, and for Maggie and Negan to forge some sort of begrudging truce.

Here, Maggie, Negan, and Gabriel — posing as Whisperers — steer a horde of walkers toward The Reapers’ compound. Pope and the Reapers wisely slow them by planting landmines around their camp (something the Alexandrians would have been smart to do themselves). It slows Maggie and Co., but doesn’t stop them. And so, they pull out the big gun: A hwacha, which is capable of firing around 200 rocket-powered arrows at once. This will almost certainly wipe out the horde (and maybe kill Elijah, but Gabriel, Maggie, and Negan have too much plot armor to die), and so Daryl — working from inside The Reapers — tries to protect his people. This necessitates telling Leah that he is actually still in league with Maggie and Co. He asks Leah to help him take down Pope, and Leah ultimately does kill Pope, but not to help Daryl. She kills Pope because Pope decides to launch the hwacha while his people were still in the target zone.

Leah, however, does not switch allegiances and join forces with Daryl. In fact, she radios her people and tells them that Daryl killed Pope after Daryl kills one of The Reapers, because Leah is also trying to protect her people. She doesn’t kill Daryl, and Daryl doesn’t kill her. Leah, however, does launch the hwacha directly at Maggie and Gabriel, and that’s when the episode ends — with these glorified bottle rocks bearing down on them. Maggie is not going to die. Negan almost certainly won’t die, so not only is it a frustrating cliffhanger; it’s a bullshit, meaningless cliffhanger.

Meanwhile, in Alexandria, there’s a heavy storm (for mood and bad lighting), and walkers have breached the wall. Most of the storyline entails Rosita and Judith holding the zombies off until the final minutes of the episode, when they break into the house and corner Judith and Co. in a flooding basement. Their fate is likewise left uncertain, but there’s no way they’re gonna kill Judith, and it would be a painfully cheap way for Rosita to die.

— Pope may be the most short-lived Big Bad in the history of The Walking Dead. What’d he get? Three episodes? And then he’s killed off by one of his own? We never even got to see a showdown between Pope and Father Gabriel, which I thought was the whole point of creating a religious-type cult leader.

— Hwacha or not, Maggie and Negan are obviously not going to die when the series returns, but I’m not sure the Reapers — or at least, Leah — will be killed, either. They may keep her alive and hold her for the Daryl and Carol spin-off, which I am seriously considering bailing on. There are only so many bad zombies shows I can continue to watch.

— Midway through the season, a wounded Alden is left behind by Maggie and Negan in a church. We haven’t seen him since. He’s the Gendry is still rowing of TWD.

— It’s possible, though it would be really lame, that Rosita was bitten while holding off a small horde of zombies. She’s covered in blood, and it’s not clear that it’s all zombie blood. I can’t imagine she’ll die the same way that Carl died, but at this point, we can’t really rule out anything.