'Fear The Walking Dead' Is Bad

Every two or three months, I like to keep everyone updated on the happenings over on AMC’s The Walking Dead universe, especially after a significant or interesting happening or on a slow news day. Yesterday, Fear the Walking Dead aired its fifth midseason premiere, and nothing significant or interesting happened, so I’ll let you conclude why I decided to write about it today.

While The Walking Dead has had a creative jumpstart in its ninth season and appears to be continuing its rejuvenation in its tenth season under sophomore showrunner Angela Kang, the fifth season of Fear the Walking Dead finds itself in a creative abyss. The show is broken. It barely resembles a The Walking Dead series anymore. It’s like a cheesy family drama, with zombies.

Those of you who watched The Walking Dead for seven or eight seasons probably remember Morgan Jones: After he lost his wife and son, he suffered a major bout of PTSD and lost his damn mind before a guy named Eastman gave him a stick and told him that “all life is precious.” He relocated to Texas after TWD’s eighth season, and Morgan’s that same character on Fear the Walking Dead, only now he’s like the Dad of the group, and the entire series and all the characters have basically taken on that “all life is precious” mentality. It does not make for particularly compelling television. Morgan and his crew are now on a mission to help people, like the goddamn zombie apocalypse A-Team.

This week’s midseason premiere — shot documentary-style like The Office because why not? — sees Morgan and Company travel to a house surrounded by landmines so that they can help the kid, who lives inside with his mother, get an inhaler because he ran out of asthma medication. No, I’m not kidding. The mission to get an inhaler is filmed by one of the characters — Maggie Grace’s Althea — and turned into a sort of public service announcement video. Morgan and Co., take this documentary footage showing them performing good deeds and play it on a loop on a VCR hooked up to a generator inside of a truck stop so that passersby will see it and use a walkie-talkie to reach out to Morgan and Co., to ask for help.

This is what Fear the Walking Dead has come to. But don’t worry: There is a villain, and he puts every other The Walking Dead villain to shame. His name is Logan, and he wants … gas. Watch out, Negan! No seriously: A few years into the zombie apocalypse, all the gas has gone bad, except that Morgan and Company have a secret stash of good gas in a place they call “Tank Town” because they need it for their A-Team convoy. Logan is trying to find that location so he can steal the gas because “the dead are made for walking, but humans aren’t.” His entire motive for stealing all that gas is … he doesn’t like to walk.

This is not an exaggeration. The big bad in season 5 is a guy who hates walking. He’s also played by the guy who used to provide the voice for Max Headroom. I mean, I don’t want to get all Dad joke on you, but shouldn’t this show just be called Fear the Walking?

Meanwhile, Alicia — who was otherwise the best character on the series — has taken a turn for the worse, as she’s now adopting Morgan’s character traits. She refuses to kill now. She doesn’t even kill walkers anymore, on account of being sprayed in the face by a radioactive zombie a few weeks ago (the first half of the season was like a really bad Chernobyl parody). She may be dying of radiation poisoning, but she’s on a new mission of her own: She’s trying to find whoever keeps leaving life-affirming messages on trees. 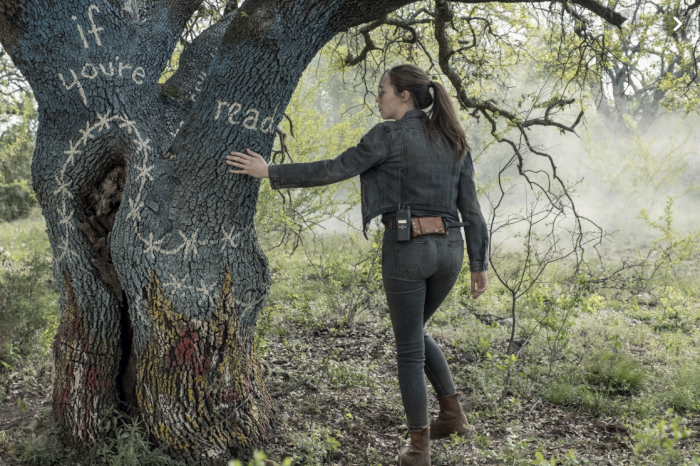 No, I’m not making it up. Why would I make something like that up?! And there are rumors that the messages will lead Alicia back to her mother, Madison, who died back in season four after being surrounded by a zombie horde. I don’t want to believe those rumors (although, I may be partially responsible for them), but given the state of Fear the Walking Dead at the moment and the fact that we never actually saw Madison die, and the fact that another character (Daniel) escaped a house fire, a flood, and being shot in the face — he was left for dead twice and is still alive — I’m not going to completely dismiss them, either.

Anyway, that’s the state of Fear the Walking Dead now. Garrett Dillahunt is being wasted on a series about a bunch of do-gooders in the zombie apocalypse who are trying to stop a bad guy from stealing their gas because he doesn’t like to walk. I’m more and more convinced that Fear the Walking Dead, which has been renewed for a sixth season, only exists now to illustrate how much better The Walking Dead is by comparison. It’s working.


← Review: Season 2 of 'The Terror' is a Devastating Ghost Story About the Horrors of Internment | Anthony Scaramucci Wants Donald Trump off the Republican Ticket →