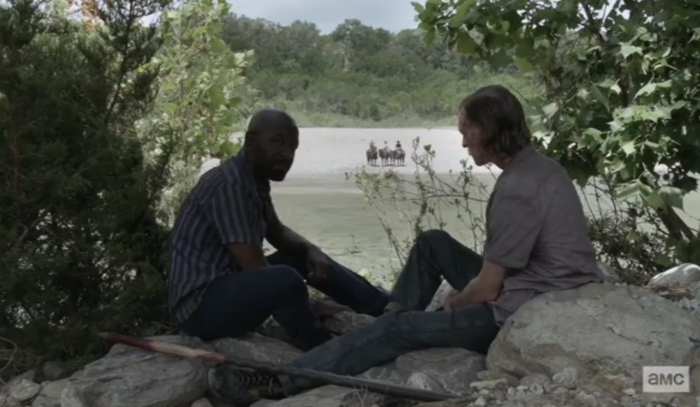 Here Is the Dumbest Plot Hole on Television in 2019

As a television critic, I watch a lot of bad television. The worst show I’ve seen in 2019 is Netflix’s The I-Land, followed by NBC’s The Manifest. Not far behind those two shows, however, is the fifth season of The Walking Dead spin-off, Fear the Walking Dead, a show that criminally wastes the talents of Garret Dillahunt, Lennie James, and Alycia Debnam-Carey.

What Fear the Walking Dead has that the other two shows do not, however, is the year’s dumbest plot hole. I want to make this short, but here’s some brief context: In the last two episodes of the season, The Good Guys are in search of a new home. However, The Bad Guys stole their gas, so they need to find someplace relatively close. For reasons that do not need to be explained, they settle upon a place called Humbug’s Gulch, formerly a Wild West Attraction in the pre-apocalypse days. Garret Dillahunt’s character, who used to work in these attractions, notes that it’s perfect for them. “There’s plenty of room for us, and there’s a fishing hole nearby.”

They know how to get there because another character played by Jenna Elfman has lots of maps, which would presumably also show sources of water. 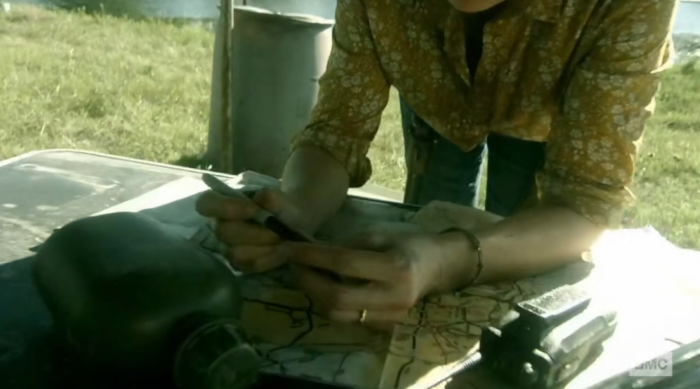 So, the Good Guys head off to Humbug’s Gulch. However, on their way, they encounter an old bridge. As they cross it, it collapses and their fuel tanker falls in. Meanwhile, a character named Tom who is filming the fuel tanker collapse from on top of the bridge (don’t ask) also falls into the river below and dies. 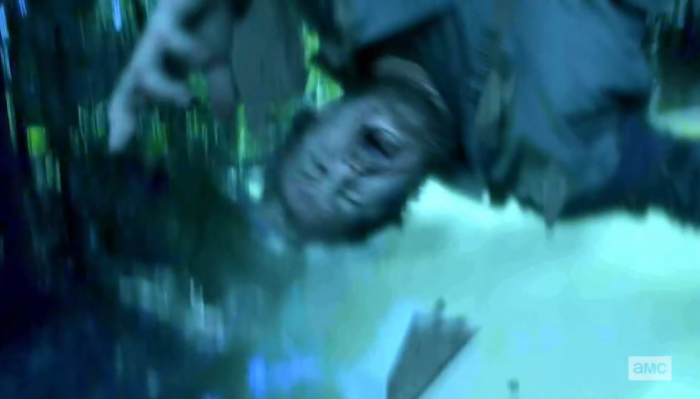 Once across the bridge, the Good Guys drive a little further before they run out of gas. They decide to walk the rest of the way to Humbug’s Gulch. Once they arrive, however, they find that it is overrun with zombies and therefore uninhabitable. “There’s no food or water,” one of the Good Guys says, recognizing that without immediate help, they will die. So, they’re forced to call The Bad Guys on a walkie talkie and ask for help. The Bad Guys are eager to offer help, but the Good Guys will have to join their group, in exchange.

One of the Good Guys, Dwight, however, refuses to join the Bad Guys, so he leaves and walks back to their convoy, which had run out of gas a few miles back. When he gets there, he discovers several horses. 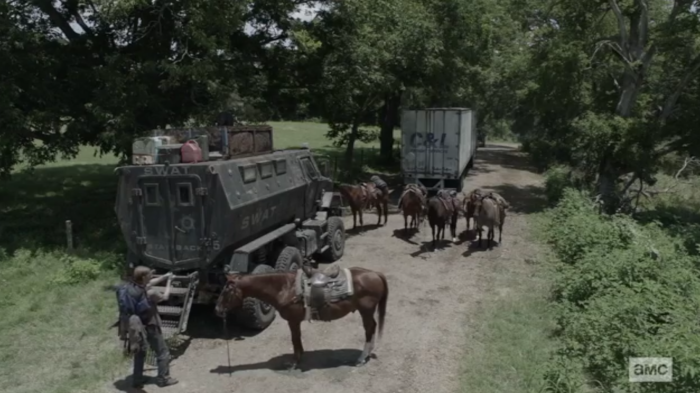 “You just saved our lives,” he says to the horses. It’s not immediately apparent what he means by that until he returns to Humbug’s Gulch with the horses. 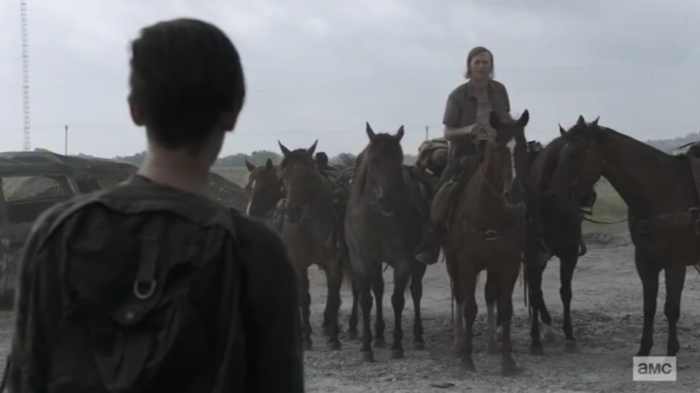 “Don’t you know what this means,” Dwight tells them. “If they’re alive, there is water nearby. We can make it work here. We don’t need [the Bad Guys].” Wait? The difference between life and death was water?

Unfortunately, the ship has already sailed. They’ve already called the bad guys, and they are on their way. However, the Good Guys come up with a plan to use the horses and corral a horde of zombies and use those zombies as weapons against the Bad Guys. They decide to lead the zombies back to their convoy a few miles away, where the horses were discovered and head off the Bad Guys there. Two of the Good Guys act as lookouts. From here, they are watching The Bad Guys at their convoy. As you can see, there is a source of water behind them. 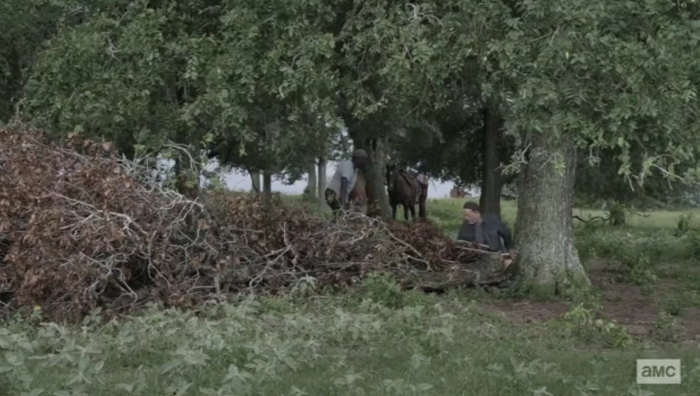 In fact, once their plan to use the zombie horde as a weapon fails, they lead the zombies into the nearby river, which washes them downstream. 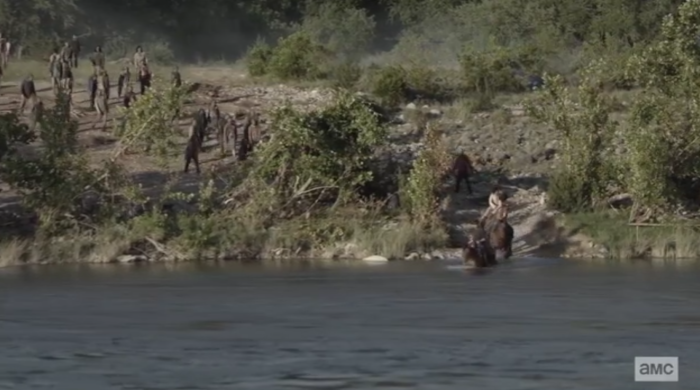 Ultimately, the Bad Guys end up abducting everyone back at Humbug’s Gulch and kill a major character. However, all of it could have been prevented — they never would have had to call the Bad Guys in the first place — if only they had known there was a life-saving source of water nearby.

This is a highly watched cable series, a spin-off of the most popular show on cable, and yet the writing on it is so bad that the characters apparently didn’t even realize there was water nearby even after a character fell into a river and died. That, really, is this season of Fear the Walking Dead in a nutshell.

← Fantastic Feast 2019: 'The Platform' At Fantastic Fest | In Which We Have a Nerd Party About the Clothes in 'Four Weddings and a Funeral' →