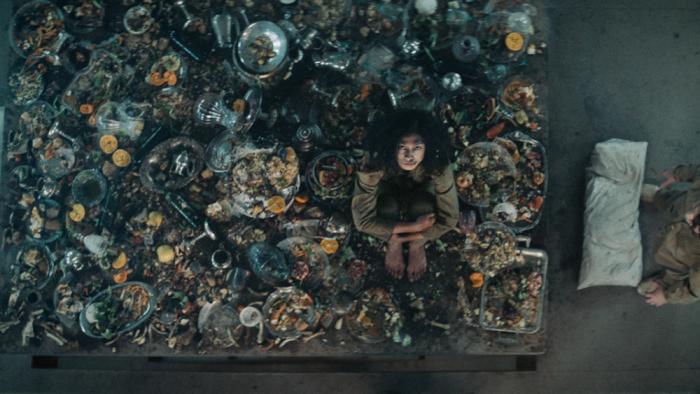 The Dystopian Thriller 'The Platform' Bolstered By Fantastic Feast

Beyond the bounds of the Alamo Drafthouse where the Austin film festival is based, Fantastic Fest celebrates cinema with a series of special events meant to enhance the experience of their stupendous slate. This year, that included a staged reading of the Showgirls screenplay to toast the cheeky documentary You Don’t Know Me, a live recording of the Switchblade sisters podcast with The Long Walk’s director Mattie Do as its special guest, and a horror-themed drag show featuring Peaches Christ and Mark Patton, who both appear in the sensational doc, Scream, Queen! My Nightmare on Elm Street. Then, there’s the Fantastic Feast, a special event where one of the fest’s films is accompanied by a multi-course meal exclusively composed to play into its themes. This year, that made for a mouthwatering mindf*ck as the Fantastic Feast focused on the dystopian drama The Platform.

The directorial debut of Galder Gaztelu-Urrutia, The Platform follows an educated inmate (Ivan Massagué) through the hell of The Pit, a vertically stacked prison where meals are doled out in a shockingly cruel manner. Each day, an elaborate feast is made by a stern army of chefs, then lowered down on the platform from top to bottom. The prisoners on the top levels have their pick of lobster, wine, and panna cotta. Those below will feed on what’s leftover, leaving less and less until those in the bottom are left with nothing.

You can get a taste of The Platform’s disturbing premise with this clip:

Before the film screened, there was an introduction from Fantastic Fest co-founder Tim League and executive chef Brad Sorenson, the latter of whom expressed his hope that we’d understand the reasoning of the menu as we went along. The nervous chuckle that burst from his lips felt like a bit of a warning. It was exciting. 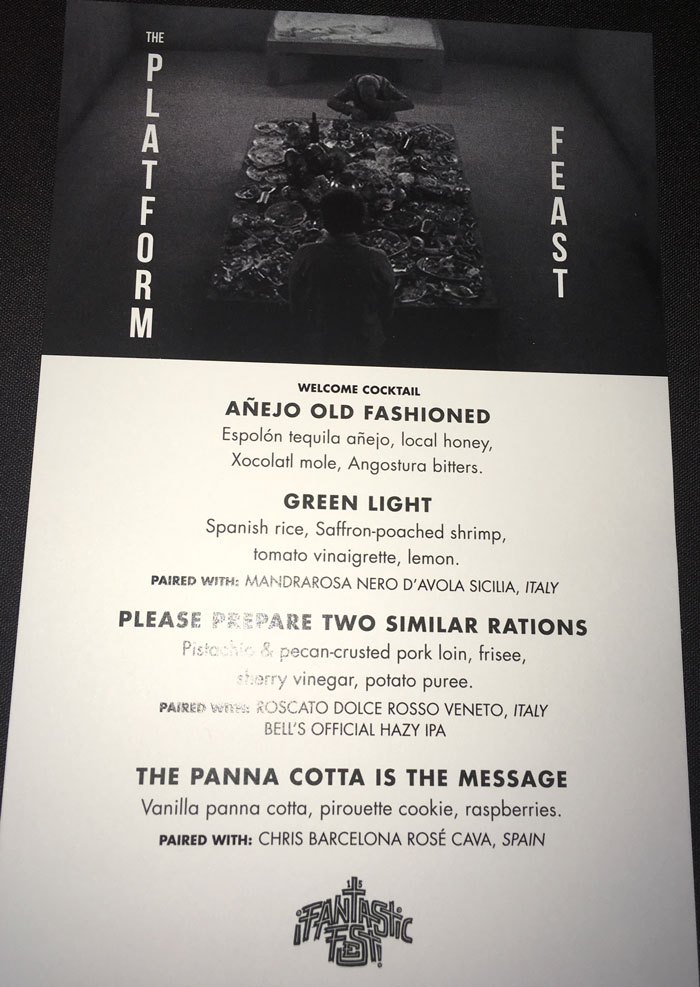 The menu card found at every seat.

The Spanish film’s culinary culture came into play with the first course, which was served as the scene embedded above played. Green Light in the movie means it’s time to eat. For its audience, Green Light was the start of our feast. Servers set down Chef Sorenson’s riff on Spanish paella, Spanish rice with Saffron-poached shrimp, tomato vinegarette, and lemon. Thankfully, unlike the characters in The Platform, we were not forced to forage with our hands and were granted utensils. Still, eating in the dark proved a bit tricky, and I definitely took a big bite of lemon unsure what I had stabbed with my fork! But another upside to the dark: no one saw my faux pas. 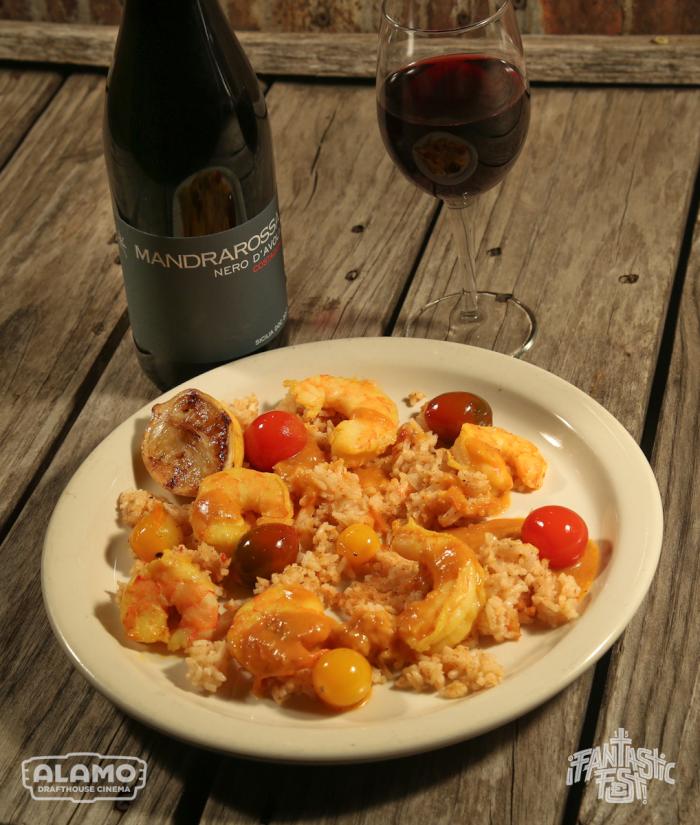 They paired this course with a glass of Mandararosa Nero D’Avola Sicilia, a delicious red wine that reflected the vino a ravenous inmate guzzles greedily onscreen. It was unnerving to see the prisoners’ green light go off and pulling away the platform and its bounty, while this meal still sat before us, unquestionably ours and undeniably decadent.

The second course proved a bit sinister. By the time it was served, The Platform’s hero had encountered the savagery that comes from the threat of starvation. And he’d met an inmate desperate spark a “spontaneous solidarity” that could change the ways of The Pit. She eats only what she needs to survive, and then she makes two portions for those immediately below. As the platform is lowered, she entreats the next set of diners to do the same. As she did this, two portions of food were set before me. This course was called Please Prepare Two Similar Rations. 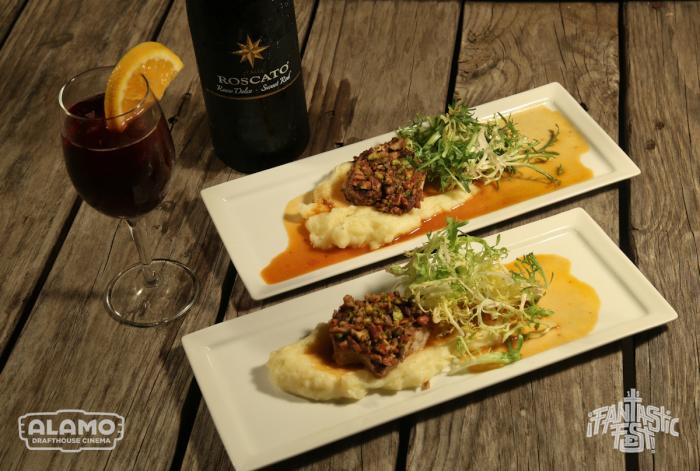 Identical plates of pistachio and pecan-crusted pork loin, frisée, sherry vinegar, and potato purée, sat before me. And the smell of the nuts and pork hit my nostrils with a gnawing temptation. But was this a mistake? A test? A lesson?

Afterward, I spoke with a guest who was the very first served. He told me that being presented with the two plates hit him with a similar wave of panic. He feared he was meant to pass one on, and so didn’t touch either plate until he watched to be sure every single audience member had also been served two plates. I’d waited until I saw my whole row had been served the same, then took a hesitant bite. The taste was divine. But the discomfort of this course wasn’t done.

As I chewed the pork, moist and flavorful, a cryptic character began to detail the mechanics of cannibalism. See, on a prison level with no food, you might consider eating your cellmate. Their flesh looks like cuts of meat. As I ate pork loin, the character went from listing human body parts to listing cuts of pork. I reached for that second glass of wine as my mouth went dry.

And it wasn’t just the meal that was making The Platform’s message of collective care and community hit harder. It was also the setting. A short shuttle ride from the Alamo Drafthouse had spirited us to Community First, a village built to combat homeless by giving the chronically homeless homes, work, and a community. Tiny houses and RVs provide shelter while the local charity Loaves and Fishes provides meals and outreach. But according to the brief tour we were given before the screening, the core element of this place is community, where people are cared for and won’t slip through the cracks.

Alongside the village’s entryway, we were seated at long folding tables arranged in a tiered, grassy outdoor theater. A small stage sat before us and above it a grand projection screen. Here is where Community First and Alamo Drafthouse holds free weekly movie nights, where residents and neighbors from outside the village are welcome to come, enjoy, and make their community ties stronger. 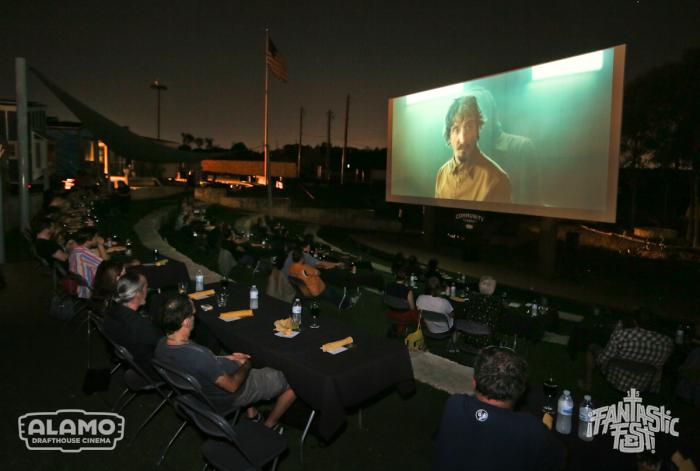 It was a strange thing to eat a decadent free meal at the edge of a village that contains people who’ve begged and scraped for meals for years and even decades. The guilt was undeniable. But more than this, I felt appreciation for Community First’s message, which is echoed in The Platform if not the meal. Community is essential for combatting economic inequality. But to achieve it, we must recognize our own barriers and advantages and how they make us complicit in the mistreatment of those on lower “levels.” Thinking on all of this, my mind was spinning, my eyes locked on the screen before me, my heart was pounding hard when dessert arrived. 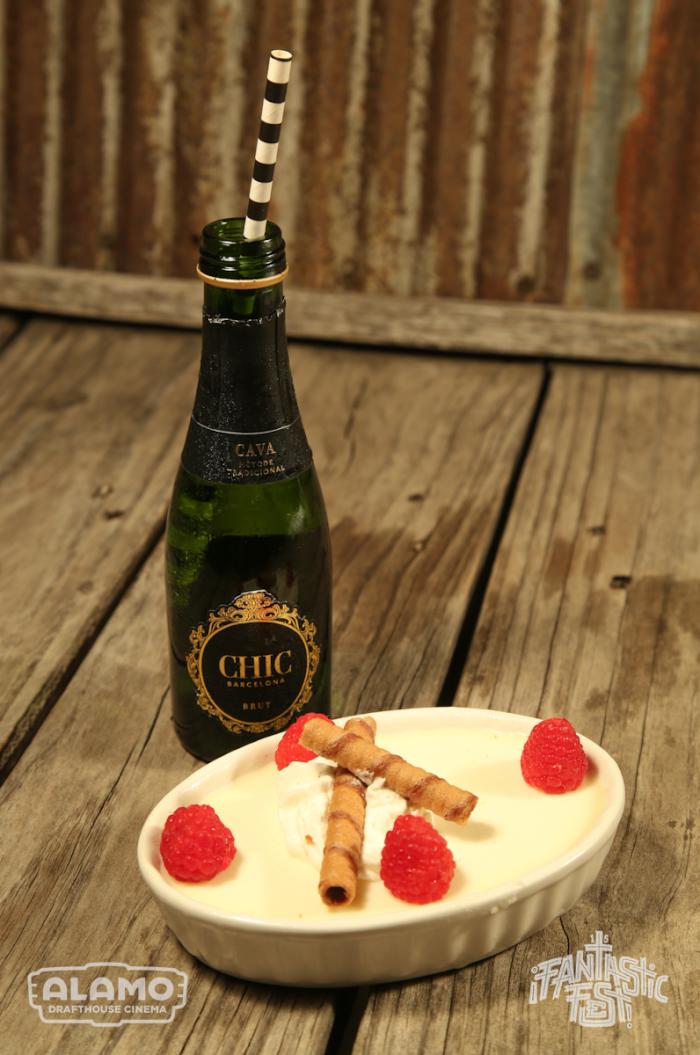 Not wanting to spoil the third act of The Platform, I’m reluctant to explain how this panna cotta comes into play. Suffice to say, as delicious as it smelled, as pretty as it looked on screen and as pretty as I assumed it looked in the dark, I was hesitant to take a bite. I was hesitant because of what it might mean to take bite. My eyes welled up with tears, as I watch the poignant final sequence of the film. My spoon sat waiting and untouched. But then, catharsis! Finally, I felt it was okay to take a bite. Plus, logic kicked in from years of catering that made me realize that if I sent it back, it’s not like someone else was going to eat it. It was most likely going to be thrown away. And as the menu said “The Panna Cotta Is The Message,” it would be horrible to waste it. The dessert was scrumptious and made the film’s finale all the sweeter.

The Platform would’ve been an amazing movie without the sensory overload of the meal and a real-world reflection of its message shimmering just behind us. But being able to experience both under starry Texas sky, felt unique, incredible, and important. Each enhanced the impact of the other, making the Fantastic Feast more than a movie, more than a meal, and more than a message. By combining this film and this feast with this remarkable location, Fantastic Fest and Community First offered its guests an extraordinary cinematic experience and plenty of food for thought to take back to our communities.

← 'Women Of Reddit, What Do Men Do They Think Is Okay But Is Actually Creepy?' | 'Fear the Walking Dead' and TV's Dumbest Plot Hole of 2019 →